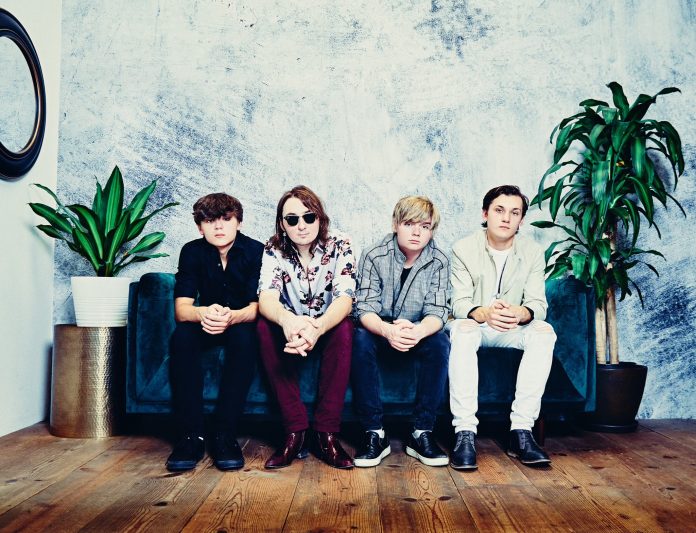 First of all, it’s pronounced “Milo.” Not “Meeloo” or “Myloo,” “Milo.” That’s the first thing that Ryan Beckett, Zach Ninfo and Liam & Nolan Meadowcroft want you to know about their Reading-based band.

The second thing they want you to know is that they “don’t believe in” revealing their ages.

Friends and fellow musicians since middle school, not even the pandemic has stopped Beckett, Ninfo and the Meadowcrofts from clawing its way into the alternative music scene.

One year later, it hit #22 on the iTunes Alternative Music chart. A reggae remix of “Compromise” recently reached number one on the Amazon charts somewhere in the Caribbean.

“In a weird way, it kind of helped us with social media,” Beckett said about the pandemic. “Record labels, everyone looks for your social media account. It’s all numbers now.”

“Through this terrible pandemic we got a lot of great connections with people,” Ninfo said. “It’s opened up a new window where we were forced to look at different opportunities.”

“If you keep thinking of it in a negative way,” Beckett said, “it’s gonna beat ya.”

Founded in 2018, Milou Sky has since amassed 103,000 Instagram followers and a flurry of press coverage in every outlet from Alternative Sound to the Daily Star of Bangladesh to the Kathmandu Tribune. Their songs often deal with girls, who they say “make the world go ‘round.”

“We just like to write what we’re feeling about any situation,” Liam said. “We’re not always just writing about a particular moment or something that we see on TV or anything.”

On Twitter they describe themselves as “pop/rock with attitude” but Beckett prefers the term “genre agnostic.” He wants to write songs that have one meaning on bad days, and another meaning on days “when they’re kickin’ it and they’re bumpin’.”

“Whatever sounds good in a song,” Ninfo said, “we’ll do it.”

Beckett and Ninfo were stepbrothers and fans of classic rock who decided to follow in the footsteps of their favorite bands. The influence is obvious just by looking at the group’s nostalgic fashion.

“I definitely like rocking flannel and the aviator glasses,” Beckett said.

The four quickly noticed how well their personalities work off of each other. Ninfo says that whatever mood Beckett’s in is usually the mood of the rest of the room. Their first gig was at the Wilson West Middle School lockdown.

“We were terrible,” Beckett remembered, “but it was fun.”

They then graduated to open mics at the All-American Sports Pub in Sinking Spring, where they found an appreciative audience.

“We were like a household name there,” Beckett said. “It was an open mic, but it was our open mic.”

They then got a gig playing at local festivals and BCTV’s. The old folks weren’t a fan of their original stuff, but they danced when Milou Sky covered the oldies.

“They were boogying,” Beckett said, “they were digging it.”

Ninfo’s uncle, who managed a Lancaster County-based band called The Sharks back in the ‘90s, became their manager. He even found them a New York City studio to record in. The band was originally called The Reasons, but that name was too generic.

Milo Sky was the name of a character in a short film that the boys were working on, and Milou was Beckett’s grandmother’s maiden name. It was a perfect fit. Like all of their gigs after March 2020, the pandemic also derailed that short film.

In songwriting, mood is everything, and the pandemic has put Beckett in an isolated and frustrated mood. However, he’s preparing for when things go back to normal.

“Before you know it, things are gonna open back up,” he said, “and we don’t wanna fall behind.”