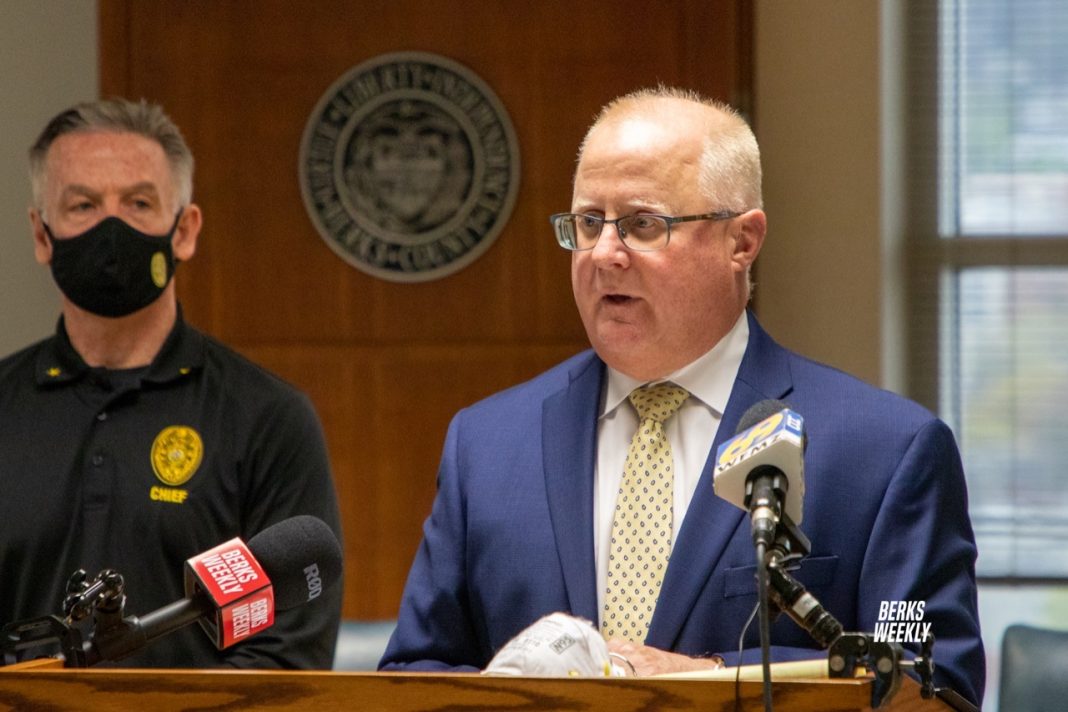 In a press conference Thursday morning in downtown Reading District Attorney John Adams announced he has determined that the actions of a Muhlenberg Police Officer who used deadly force against Stephen J. Hughes on March 15, 2021 was a reasonable act of self-defense and defense of another.

According to Adams, the officer involved was justified in employing deadly force against Stephen J. Hughes to ensure the safety of himself and another officer. As a result, the officer will not be charged with any criminal offenses in connection with the incident that day.

Pennsylvania Law allows all persons, including police officers, to use deadly force in an act of self-defense and defense of others if the person reasonably believed that he/she faced an unlawful interference that created a risk of death or great bodily harm. If, as here, the person’s actions are privileged under the law of self-defense they cannot be convicted of any crime.

The investigation revealed that on March 15, 2021 at 2:15pm, the Berks County Department of Emergency Services received a 911 call from a female, reporting that her uncle is being very threatening, and the address is 706 Wagon Wheel Lane, Muhlenberg Township. She confirmed with the operator that she needed an officer as soon as possible and then the call disconnected. A short time later, she placed a second call to 911, where she provided more details.

The complainant identified herself as the niece of Stephen J. Hughes (uncle). The complainant informed the officers that Hughes is sixty-two years old, suffers from alcoholism and has mental and physical health problems.

Investigators also say, prior to calling 911, she spoke with a mental health professional and explained the situation regarding her uncle’s (Hughes) current condition.

She reported that the day prior (March 14, 2021), she was with her uncle inside his home. He was intoxicated and held a knife to her face and threatened to kill her, but he did not harm her. The mental health professional advised her to contact the police because in his professional opinion, he felt that Hughes was a possible threat to himself or others. 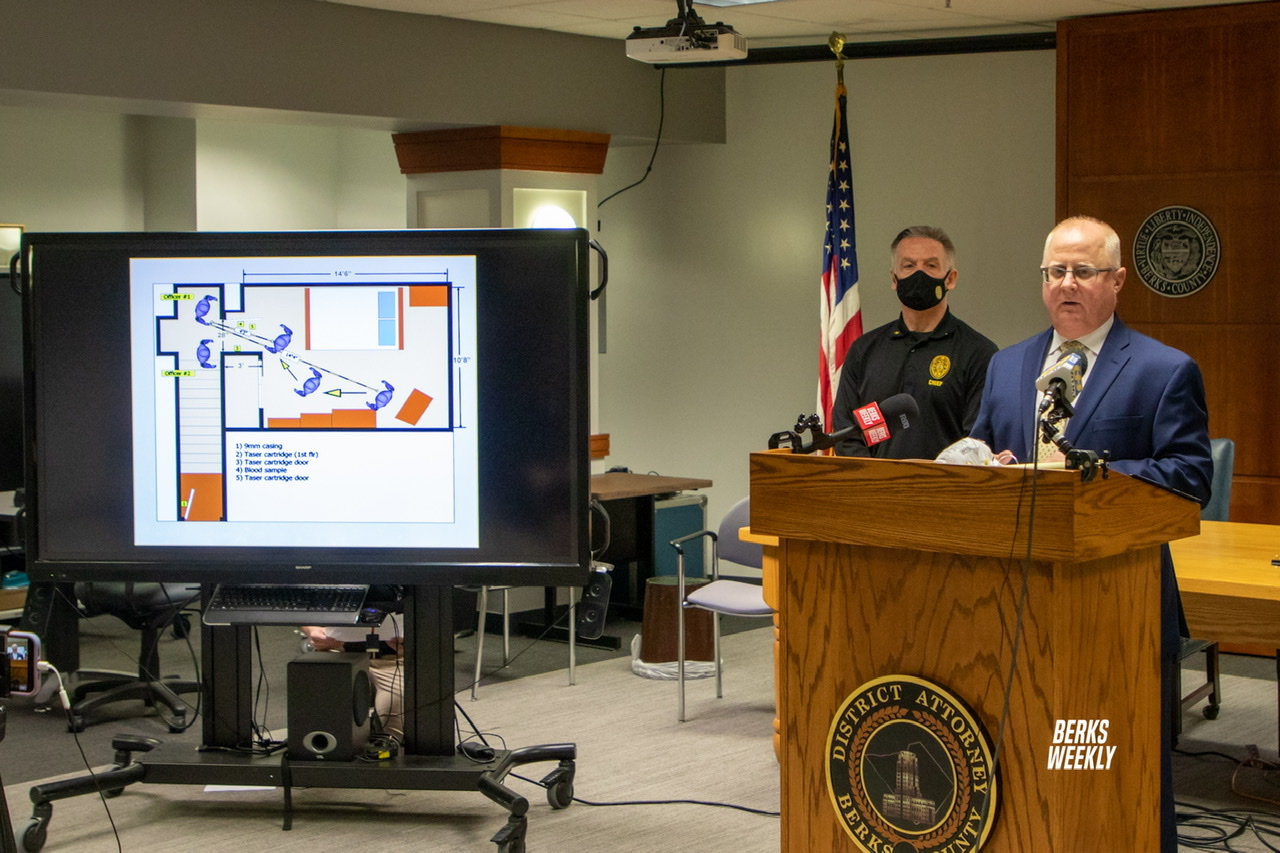 Two officers proceeded to the second-floor bedroom and observed the bedroom door closed.

One of the officers (Officer #1) identified himself as a police officer and was able to have a conversation with Hughes through the closed door. Officer #1 told Hughes that he wanted to talk to him and get him some help. Officer #1 continued to maintain communication with Hughes and at one point during the conversation Hughes told Officer #1 that he didn’t want to talk to him and that he had a knife. In an effort to continue to deescalate the situation, Officer #1 continued to try and converse with Hughes, but Hughes went silent.

After approximately two minutes of silence, both officers (Officer #1 & Officer #2) became concerned that Hughes may be attempting to hurt himself. Both officers decided to open the bedroom door and check on Hughes’ condition. Officer #1 had his department issued handgun at a low ready position and Officer #2 had his taser in a ready position.

As the door was opened slowly, Hughes was observed standing approximately twelve feet from them with a knife in his hand. Hughes stated, “Fuck You” and began to advance towards the officers.

Officer #1 gave verbal commands several times for Hughes to, “Drop the Knife”. Hughes did not comply and continued to advance towards the officers. When Hughes came within approximately four feet of the Officers, Officer #2 deployed his taser aiming at the center mass of Hughes’ body.

Both officers realized that the taser had no effect on Hughes because he continued to advance towards the officers with the knife in hand. Subsequently, to stop Hughes’ advancement with the knife and for their own protection, Officer #1 fired one shot from his handgun aimed at the center mass of Hughes causing him to fall to the floor with a single gunshot wound to the chest.

Officers at the scene and ambulance personnel administered first aid and CPR to Hughes. He was transported to Reading Hospital/Tower Health by the Muhlenberg Area Ambulance.

An autopsy was performed on March 16, 2021 by Forensic Pathologist Doctor Neil Hoffman. Doctor Hoffman preliminarily ruled that the cause of death was a Gunshot Wound of the Chest.

The toxicology report from Penn State Health/St. Joseph indicated that Stephen J. Hughes had a Blood Alcohol Concentration of .268%. For reference, Hughes’ BAC is over three times the legal limit to operate a motor vehicle in Pennsylvania.

On April 8, 2021, the final autopsy report from Doctor Hoffman confirmed the cause of death of Stephen J. Hughes was a Gunshot Wound of the Chest. He added contributory causes of acute and chronic alcoholism and bipolar-1 disorder. Berks County Acting Coroner Jonn Hollenbach ruled that the manner of death to Stephen J. Hughes was a homicide on April 14, 2021.

District Attorney John Adams concluded that the officer was reasonable in his belief that he and the other officer were in imminent danger of death or serious bodily injury due to Hughes’ actions of refusing to comply with all police commands and by advancing towards the officers with a knife.

Adams also states that it was also reasonable to believe that Hughes had the intent and means to inflict death or serious bodily injury to the officers and the officer’s use of deadly force under these circumstances was reasonable and therefore privileged under Pennsylvania law.

“While it is unfortunate that a life was lost, the action taken by the officer involved was for protecting himself and his fellow officer” said Adams.