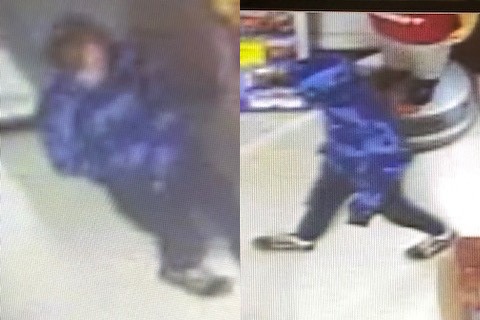 The Cumru Township Police are investigating a commercial burglary that occurred at Ollie’s Bargain Outlet, 2251 Lancaster Pike, within Cumru Township. The burglary happened on Friday, April 3rd 2020 at about 6:10 am.

Investigators responded to Ollie’s for a reported burglar alarm. When officers arrived at the scene, they discovered that a large window to the business, had been smashed out and the suspect had already fled the scene.

The responding investigators obtained the Ollie’s security surveillance footage of the incident and observed a Caucasian person wearing a bluish in colored hooded sweatshirt with a camouflage design. The suspect was also wearing dark pants and dark footwear, possibly sneakers, with a white trim and logo. The suspect is believed to have red hair and a slim build.

Surveillance images revealed that the suspect broke into the Ollie’s Bargain Outlet at approximately 6:00 am and fled the store at about 6:10 am. While inside the store, the suspect attempted to steal several items but was thwarted by security measures, although the suspect did managed to steal a few items with undetermined amount of value.

Anyone with information pertaining to this burglary incident or identify the depicted suspect is asked to submit an anonymous tip to Crime Alert Berks County. Cash rewards are available up to $10,000 if the tip leads to an arrest.

Anonymous tips may be submitted by either calling 1(877) 373-9913, downloading the ALERTBERKS app on your mobile device, or by using your mobile phone to text tips to 847411 and typing ALERTBERKS + your tip. Additional information may be found at alertberks.org or contact the Cumru Township Police Det. Sgt. George Kuriger email at: gkuriger@cumrutownship.org.