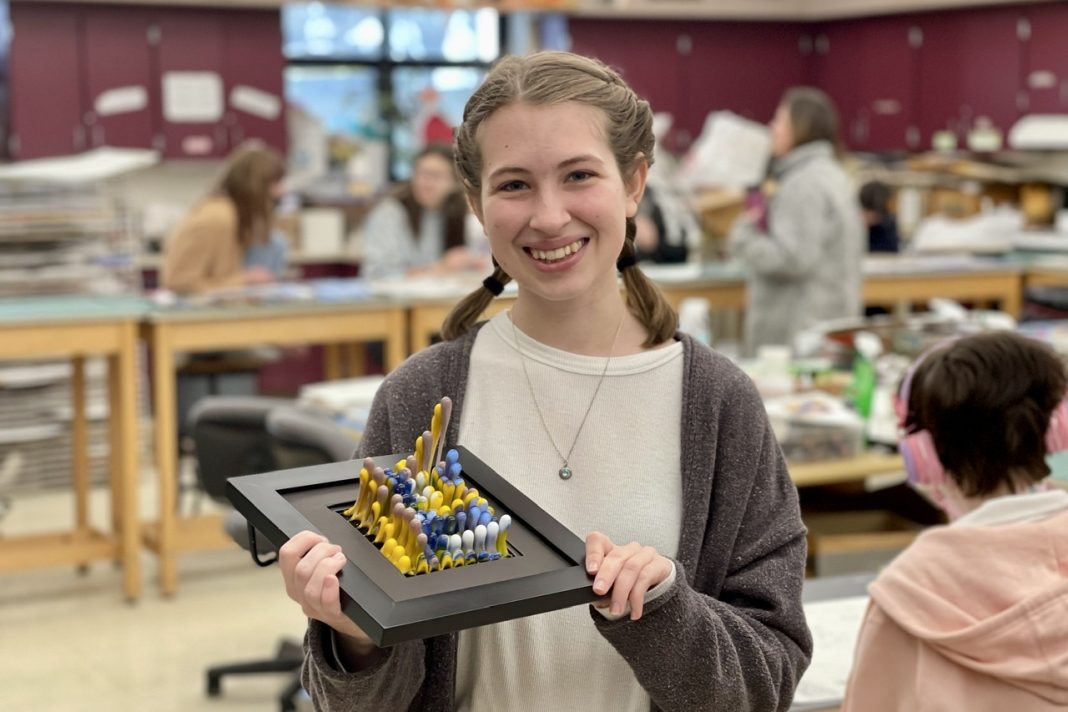 Exeter Township Senior High student Joanna Knepper will have her glass artwork displayed this June in New York City’s Carnegie Hall. Knepper, a senior, received this distinction by receiving a National Award in the Scholastic Art & Writing Awards, which is considered the nation’s longest running and most prestigious program for creative teens in grades 7-12, according to Scholastic.

More than 260,000 works of art and writing were submitted by teens in every US state, as well as US territories and Canada. From these, 2,000 works were then selected as National Award recipients–including Knepper’s glass piece, “She’s Lost Her Marbles.” Knepper created the glass piece at the GoggleWorks over the summer during a fellowship with glass artist Maggie Gallen.

Knepper said that when she began working with Gallen, Gallen asked her if she wanted to create out-of-the-box glass art. “I told her I wanted to do something non-traditional,” she said.

“So she helped me come up with different ways to create glass art, and in the beginning, I was very inside the box, but by the end, I felt like I had stretched my creativity,” which is apropos to the stretched and frozen-in-time drips of colorful glass that emanate from her winning piece.

Knepper felt that her unusual medium definitely gave her an advantage over some of the more traditional media pieces that were submitted; an opportunity that she had thanks to her art teacher, Christina Pinkerton, who encouraged her to apply for an 8-week summer fellowship to the GoggleWorks during her junior year.

Pinkerton said she was in tears when she found out that her piece had been selected. “We’ve been entering this competition for years, but Exeter’s never had a national winner,” she said proudly.

Scholastic says these awards allow students to build confidence as creative individuals; they noted that earlier winners include Andy Warhol, Joyce Carol Oates and Stephen King, among others.

Knepper is one of seven students in our region to earn the national award, and the only Berks County resident to receive it. National Award winners are also considered for scholarship awards of $10,000, an honor that Knepper said may encourage her to pursue art formally in college if chosen.