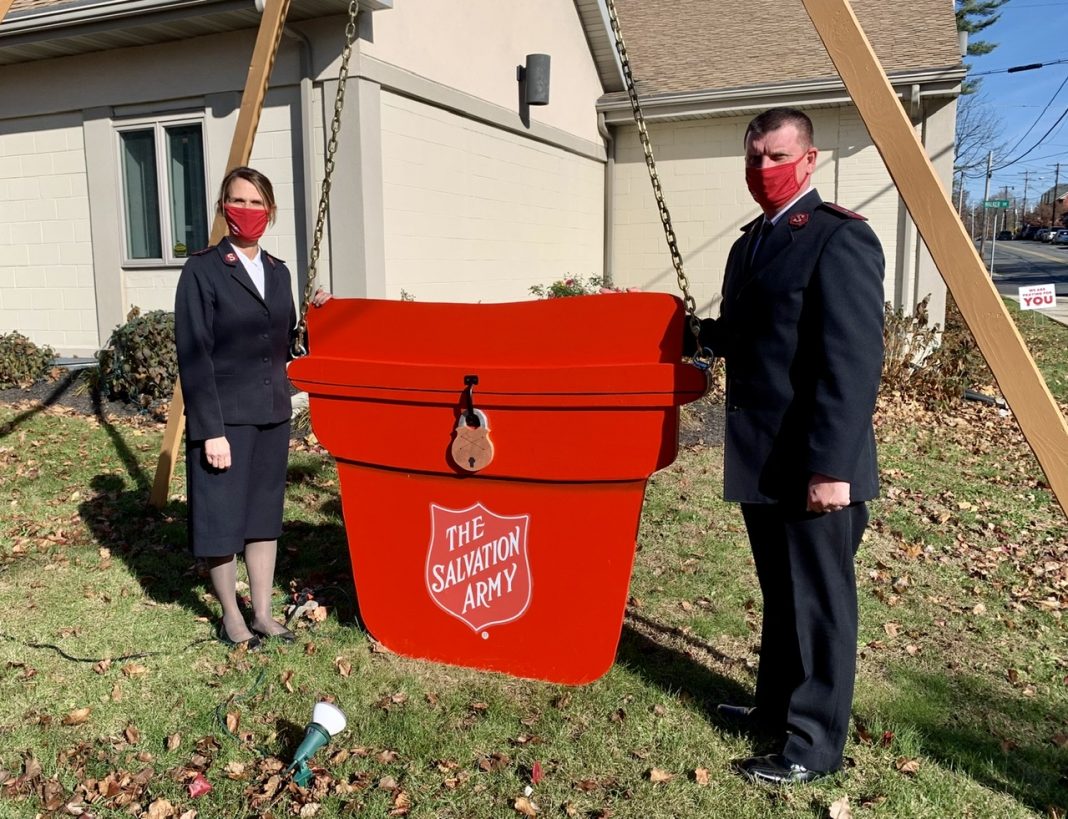 Capt. Joseph Smith of The Salvation Army likes to say that when he needs something, all he has to do as is ask for help on the sign outside his Boyertown headquarters. The people in town, he says, never fail to make good things happen.

So, with concerns growing that COVID-19 will lead to a 50% reduction in donations to The Salvation Army’s Red Kettles this year, Capt. Smith and his team decided something more was needed to drive awareness heading into the Christmas season.

The result? A can’t-miss 4-foot by 3-foot Red Kettle sign in front of his building with a big and bold message: Pandemic or not, The Salvation Army is still collecting money for those in need.

“Everything is different this year,” Capt. Smith says. “The sign is a reminder that we are still here.”

The need is greater than ever, too. The Boyertown Corps is serving more than 600 drive-through lunches a week now, up from 350 before the start of the pandemic. Another 450 people on average come to the Food Pantry, up 20 percent. Capt. Smith says it’s common to see three to five new families at the Food Pantry each week.

None of this would be possible without donations and the help of a steady and growing group of volunteers. “It has been a blessing to watch the volunteers take the reins and just go for it,” Capt. Smith says.

The idea for the sign outside headquarters came from the volunteers on the local advisory council, and it was built by church members Mark and Tracey Freece. The “real” Red Kettles will soon be at Wal-Mart and other locations around the Boyertown area, staffed by an army of volunteer bell ringers.

The Red Kettles are the single biggest fundraiser for The Salvation Army. Last year, $126 million was raised nationally through 30,000 red kettles, with the Eastern Pennsylvania and Delaware Division generating more than $3.3 million. This money is critical for all of The Salvation Army’s activities, from meals and homeless shelters to disaster relief and addiction treatment.

Since March, Eastern Pennsylvania & Delaware has provided more than 8 million meals, along with shelter, and emotional and spiritual support to more than 21,600 people.

Nationally, The Salvation Army expects to provide Christmas assistance to 155% more people this year than in 2019. This includes food, bill-paying, shelter and gifts under the tree for children. But with retail foot traffic expected to be down significantly, and consumers carrying less cash and coins, a drop in direct kettle donations is inevitable. As a result, The Salvation Army launched a campaign last month to “Rescue Christmas” with options to donate online.

The response so far has been gratifying to Boyertown’s Capt. Smith. “We’ve seen an influx of donations,” he says. “It’s a blessing to see people and businesses – businesses who are often struggling – who are willing to step up and help.”

Capt. Smith says he has confidence in the community and He’s confident God will provide what’s needed.

“We’re going to try our best and let Him do the rest,” he says.

Capt. Smith’s story is like so many in The Salvation Army. He was an engineer in York, and his wife, Capt. Rebecca Smith, was a hairstylist when they acted on their calling five years ago and joined The Salvation Army. The Smiths have been in Boyertown since.

This article was submitted by Salvation Army Eastern Pennsylvania