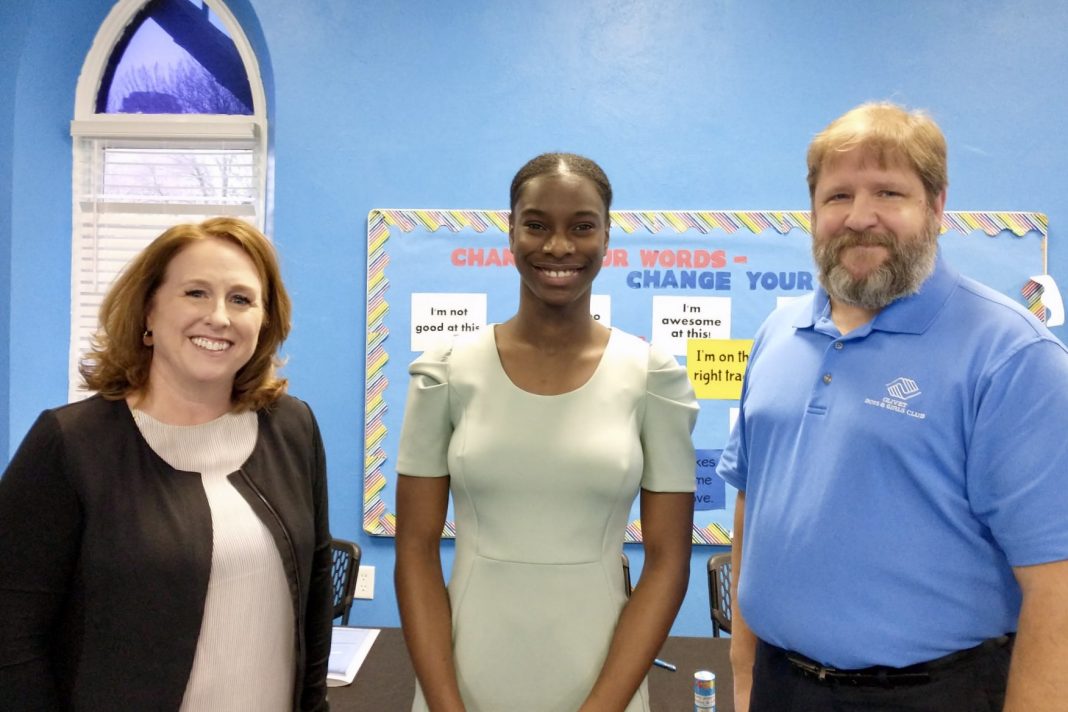 The Olivet Boys & Girls Club has named Twyla Ewen as the organization’s 2022 Youth of the Year. Youth of the Year is a leadership recognition program designed by Boys & Girls Club of America to highlight outstanding teen club members who embody healthy lifestyles, academic excellence, good character, and leadership. It is the highest honor that a teen club member can achieve.

This year, three Olivet teens were nominated as candidates for Youth of the Year and competed through an application process consisting of a resume, cover letter, and writing essays about topics such as “my club experience”, “what matters to me,” and “personal growth.”

The competition culminated in an in-person event on Thursday evening when each candidate presented a speech and answered interview questions with a panel of judges with Twyla being deemed as the overall winner.

Twyla is currently in 11th grade at Reading High School and has been an active club member at the PAL Center for the Arts Club for over 10 years.

Twyla currently participates in the performance level guitar class held at the CFA and has represented the Club through numerous musical performances at Olivet and throughout the broader community.

In addition to her guitar skills, Twyla has a beautiful, soulful voice and is a talented flutist and piano player.

In addition to Twyla’s talent as a musician, she also has a passion for volleyball, playing competitively for several traveling teams, in addition to taking several AP classes in school, and acting as an active church member and volunteering at several local organizations.

In the future, Twyla aims to attend Yale University and become a dermatologist to help others feel confident in their own skin.

As Olivet’s Youth of the Year Winner, at the end of April, Twyla will attend the Youth of the Year Pennsylvania State Competition in Harrisburg where she will compete with teens from other local Boys & Girls Club organizations.

“On behalf of the Olivet staff, board members, and entire organization, we congratulate Twyla on earning the title of Youth of the Year for Olivet Boys & Girls Club. Her beautiful voice and musical talent, academic achievement, and involvement in the Club and local community are a shining example of the Boys & Girls Club America’s initiatives of academic excellence, healthy lifestyle, and good character/citizenship. We are so proud of her accomplishments and wish her the best as she prepares for the Youth of the Year Pennsylvania state competition next month in Harrisburg” said Chris Winters, President & CEO, Olivet Boys & Girls Club.

Richard Bradbury, Director of the PAL Center for the Arts, Olivet Boys & Girls Club added, “Olivet’s Center for the Arts (CFA) club is tremendously proud of our member, Twyla Ewen, and we are so excited she will represent Olivet Boys & Girls Club in the State Competition in Harrisburg. Twyla has been a dedicated member of the CFA since 2012; in fact, I cannot recall a Wednesday during the school year when Twyla was not at the CFA, with her guitar in hand! Twyla’s parents, Richard and Mary-Ann, are so loving and supportive and have stood by her side every step of the way in Olivet’s Youth of the Year process. I am honored Twyla’s parents have placed their trust in Olivet’s Center for the Arts for her Arts Education; she has had the opportunity to study with extraordinary artists and musicians. Twyla’s success is a shining example of the importance of Arts Education in creating an intelligent, confident young woman. Twyla’s poise and her charming personality will serve her well as she moves onto the State Finals.”