Carlos Ruiz, “Chooch”, Set to be Inducted into Baseballtown Hall of Fame on August 10 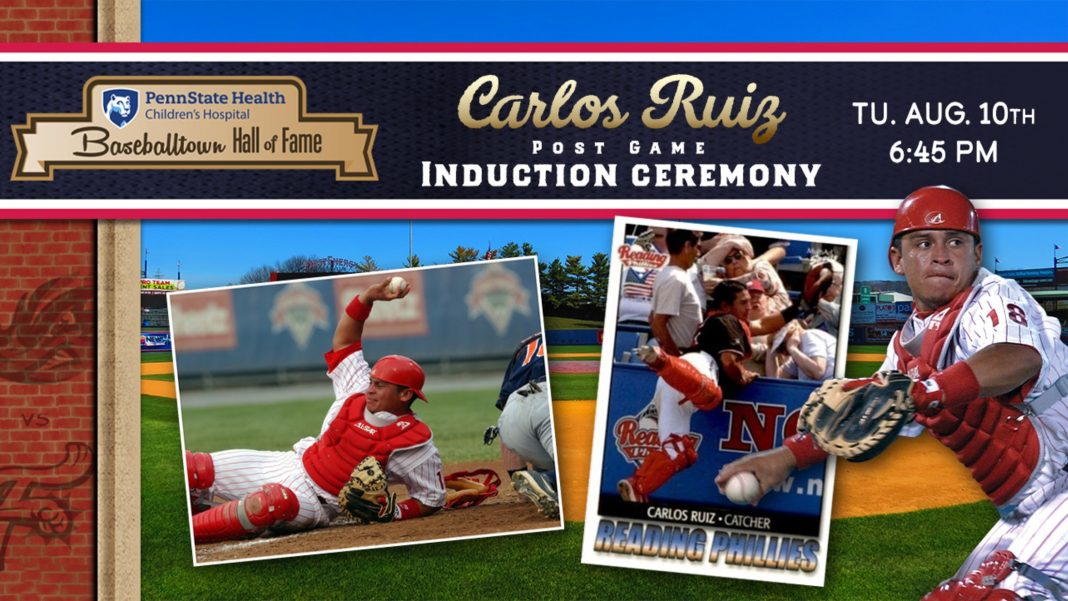 The Reading Fightin Phils have announced that on Tuesday, August 10th, former R-Phils and Philadelphia Phillies catcher Carlos Ruiz will be inducted into the Baseballtown Hall of Fame. Carlos Ruiz, a fan favorite, was fondly known as “Chooch” during his illustrious career and the R-Phils are honored to solidify the impact he had on Baseballtown both as a player and as an individual.

The ceremony will take place after the R-Phils baseball game. Carlos Ruiz will be in attendance at America’s Classic Ballpark when the R-Phils host the Akron RubberDucks at 6:45 p.m.

Ruiz was a member of the R-Phils in 2003 and 2004, when he hit .278 with 19 home runs and 66 RBIs combined over 153 games. The 2004 season pushed Ruiz into the limelight and into prospect status. Later that year, he attended the Arizona Fall League and was added to the Phillies 40-man roster. After a season in Triple-A, Ruiz made his Major League debut with the Phillies on May 6, 2006. A native of David, Panama, Ruiz was signed by the Phillies on December 4, 1998.

A 12-year big-league veteran, Ruiz finished his career following the 2017 season. In 1,136 MLB games (1,069 with Philadelphia), Ruiz hit .273/.330/.422 with 52 home runs and 278 RBIs. He was a National League All-Star with the Phillies in 2012, a year in which he hit a career-best .325. Ruiz threw out 27% of opposing base-stealers throughout his Major League career, including a career-best 41.7% in 2016, which led the National League. After 11 seasons with the Phillies, Ruiz was traded to the Los Angeles Dodgers in August of 2016, and appeared in 53 games for the Seattle Mariners in 2017 before retiring at age 38. He actually pitched in one game for the Mariners, his only professional appearance on the mound.

Ruiz was a member of the World Series Championship team in 2008, going 6-for-16 (.375) with two doubles, four walks, and a home run in the series to help lift Philadelphia to its first World Series title since 1980. He is the MLB record holder, along with Jason Varitek, for the most career no-hitters caught (4). These include Roy Halladay’s perfect game for the Phillies against the Florida Marlins on May 29, 2010, and Halladay’s playoff no-hitter over the Cincinnati Reds in the 2010 NLDS – only the second postseason no-hitter in MLB history.

Throughout his career, Chooch remained an energetic and positive force in the clubhouse. In Reading, he was always a fan favorite to watch. His personality emanated throughout the ballpark, drawing in adults and kids alike. The Reading Fightin Phils are so excited and honored to celebrate all that Carlos Ruiz has done for the baseball community and club here in Reading.