The remnants of Tropical Storm Fred brought heavy rain, wind, and even a tornado to Berks County as the weather system moved across the region Wednesday evening. With severe storm damage reported in Tilden Township, the National Weather Service dispatched a survey team to the area Thursday afternoon to determine the cause of the damage.

Thursday evening, the survey team released a report of their findings, confirming an EF-1 tornado touched down around 9pm, near Ash Road and Fisher Dam Road, for 1.10 miles, with estimated peak winds up to 95 mph.

Speaking with residents on Ash Road Thursday afternoon, many were very surprised how intense the storm was, in a short amount of time. A tornado watch was issued until 11pm that night, but a tornado warning was never issued in Berks County.

Thursday afternoon, many residents were out cleaning up yards and trimming downed trees. Kevin Gruber, who lives near the intersection of Ash Road and Berne Road, on a hill, told us he came home from work at 10:30pm Wednesday, only to find a large part of his roof ripped off his house. Gruber said he considers himself lucky he wasn’t home during the storm.

According to the National Weather Service report: the tornado touched down along Fisher Dam Road about 800 feet north of the intersection with Berne Road. Numerous hardwood tree trunks were snapped on the western side of the road with a convergent debris pattern. A corn field on the east side of the road in the same location was damaged with stalks of corn felled in a convergent pattern. 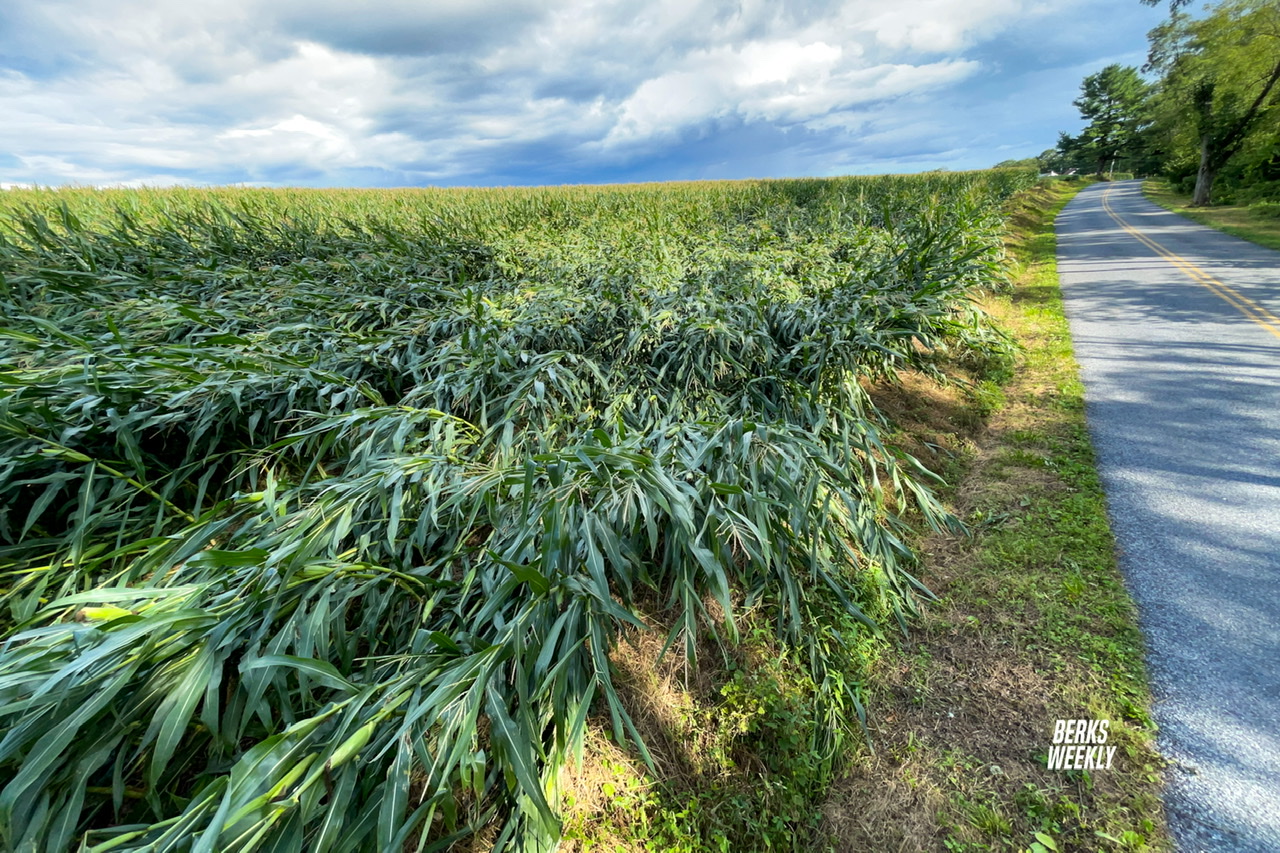 There was damage on Ash Road, including a roof that was removed from a porch and the roof damage extended into the main roof of the house. The roof was deposited to the east, while at the same time, a flagpole from the roof supports was tossed to the north. There was also numerous snapped hardwood trees in this area. Further east on Ash Road, another house had a large, healthy tree snapped. Tree damage was also noted on properties on the north side of Ash Road.

Further north of Ash Road, some damage occurred at the Village of Pleasant Hills Mobile Home community, including hardwood trees snapped and some cars were damaged by the fallen trees. Some skirting along the base of a mobile home was mostly torn off. The damage appeared to become more sporadic and then ended.

The survey was completed by Southeastern PA Skywarn Coordinator, Lou Ruh, with help from the Pennsylvania Emergency Management Agency for providing locations of the damage.