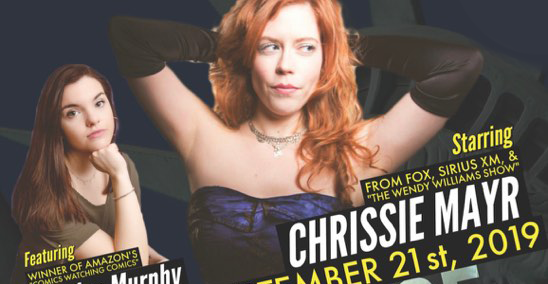 For those who are in need of a good laugh, the Reading Comedy Outlet will be hosting 2 New Yotk stand up comedians this weekend, Chrissie May and Kaitlyn Murphy. Held Saturday, September 21st, doors open at 7pm.

The show features Kaitlyn Murphy from Mamaroneck, NY. Performing comedy all over the tri-state area, Murphy is beginning to make her way around the country as she was recently featured at Snappers Comedy Club in Florida. She is also the winner of Amazon Primes Show “Comics Watching Comics”, season 5.

Headliner Saturday’s show is Chrissie Mayr. A New York native, Mayr grew up in Rockville Centre, Long Island and was voted “Most Spirited” of her high school class at Southside; which was also the alma mater of fellow comedians Amy Schumer, Dave Attell and Colin Kane.

Her love for comedy began with a college internship at Late Night with Conan O’Brien. After graduating college she completed improv Ph.D programs at the Upright Citizens Brigade and Magnet Theaters. She wrote, produced and performed in her One-Woman show, Hope which enjoyed a 9-week run at the Magnet Theater.

She quickly realized she loved the spotlight and put her new skills toward performing stand-up comedy. Her first show was at Comix in downtown NYC in 2010. She began performing tirelessly after that, grabbing up every opportunity made available to her. Within her first couple years she was selected to perform in the Women in Comedy, Laughing Skull, and Cape Fear comedy festivals.

Mayr has a passion not only for performing, but also for producing and booking shows. She ran and produced shows at New York City venues Parkside Lounge, Zinc Bar, and The Stonewall Inn. Comedy at Stonewall which is now in its fourth year of monthly shows has been featured in the NY Times, TimeOut NY as a Critic’s Pick, The Village Voice and the 2015 New York Comedy Festival.

Chrissie has appeared in every season of Fox’s Laughs. She also made notable appearances on FOX’s Punchline and The Wendy Williams Show, which she was also a writer for. Chrissie has also appeared on The Reelz Network, The Chris Gethard Show, The Travel Channel, and What Not To Wear. Chrissie can often still be seen and heard on Sirius XM Radio and The Compound Media Network.