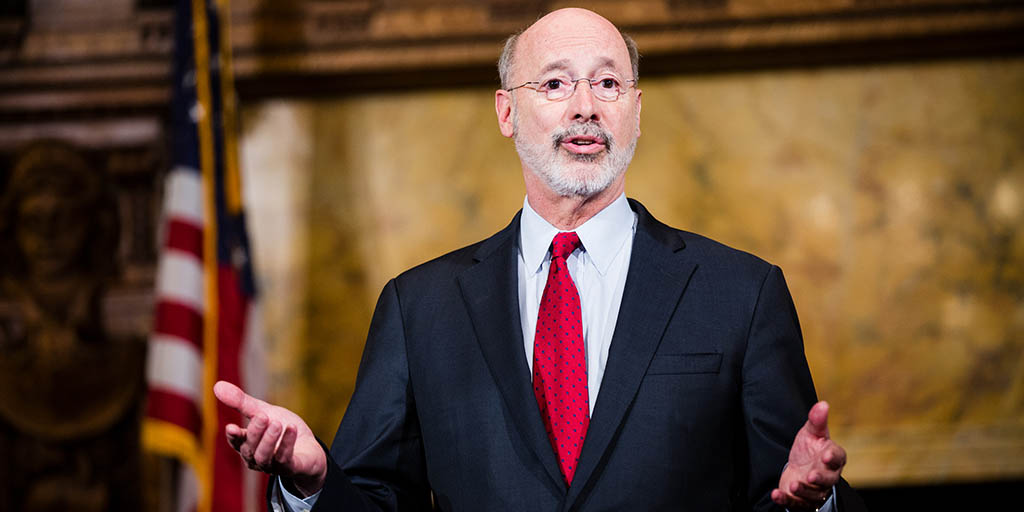 Today, the governor joined legislators and workers to renew his call to raise Pennsylvania’s minimum wage to $12 an hour with a pathway to $15. Later this week, the governor’s plan to extend overtime pay eligibility to 82,000 more workers will be considered by the state’s rule-making board.

The General Assembly has not passed a minimum wage increase in more than a decade, despite wide public support and many Pennsylvanians working full-time and multiple jobs but still unable to afford their lives.

The governor’s proposal would give a direct wage increase to 1 million workers, provide better financial stability for women, rural and tipped workers, enable thousands of people to work their way off public assistance and grow the economy for everyone.

“There’s momentum to finally raise the wage, but momentum in the Capitol doesn’t put food on the table in workers’ homes,” said Governor Wolf. “Too many workers are still struggling to get by because Pennsylvania hasn’t raised the minimum wage in more than a decade. The cost of living goes up and Pennsylvanians wait as 29 other states, including all of our neighbors, raised the minimum wage for their workers.”

“Pennsylvanians shouldn’t earn less than workers in West Virginia, Ohio, or New Jersey for the same job. We are a state known for our tremendous work ethic, but when jobs don’t pay enough, people can’t afford basics like food, housing, childcare and transportation. That should be unacceptable to all of us. Hardworking people deserve the dignity of being able to support themselves.”

Pennsylvania’s minimum wage has been stuck at $7.25 an hour since 2009, the minimum wage allowed by federal law. A full-time, year-round minimum wage worker earns only $15,080 annually, less than the federal poverty threshold for a family of two. Twenty-nine states have a higher minimum wage and 21 states are increasing the wage floor this year.

The governor’s proposal raises the minimum wage to $12 an hour on July 1, 2020 with annual 50 cent increases until reaching $15 an hour in 2026. When workers are paid fairly, fewer people will need public assistance. At $15 an hour, nearly 93,000 adults will leave Medicaid and the workers will generate more than $300 million in state tax revenue in 2026.

The governor was joined at a Capitol press conference by Sen. Christine M. Tartaglione, minority chairwoman of the Senate Labor & Industry Committee, and Rep. Patty Kim, both champions of raising the minimum wage.

“The unwillingness of Pennsylvania House leaders merely to consider our bipartisan minimum wage legislation is a sad commentary on their commitment to the working people of the Commonwealth,” said Sen. Tartaglione. “Senate Bill 79 is a product of good-faith collaboration and compromise, a process in which all stakeholders were heard, and perspectives considered. It represents what we can achieve as a legislature if we focus on the practical needs of our constituents. Instead, regressive ideologies and nebulous special interests seem to be calling the shots. As a result, millions of low-wage Pennsylvanians continue to suffer.”

Raising the minimum wage will improve the economic security of women and is a step toward closing the gender pay gap. Six in ten workers earning less than $12 are women. Additionally, 30 percent of workers getting a boost in pay are age 40 or older, which refutes harmful stereotypes by making clear that hundreds of thousands of adults are stuck making poverty wages. Further, it dispels the harmful myth that low-wage workers are mostly teenagers. All low-wage workers, no matter their age, would benefit from a minimum wage increase and deserve to be paid a living wage

“I’m grateful that Governor Wolf has once again included a living wage for Pennsylvanians as a budget priority,” said Rep. Kim. “We can’t sit back for another year and watch other states lead on minimum wage. We have lagged behind for too long while workers are working longer and bringing home less. Let’s lead on this important issue that will help hundreds of thousands of families stop the paycheck-to-paycheck lifestyle. Let’s reward hardworking people and raise the minimum wage to $12 per hour.”

Rural workers will also benefit from an increase in the minimum wage. The highest percentage of workers getting a raise are in 29 rural counties. Raising the wage will make the paychecks of hardworking rural workers more competitive with jobs in cities and the suburbs.

“Waiting more than a decade for a minimum wage increase is too long,” said Governor Wolf. “The public overwhelmingly supports raising the wage and it’s time for Harrisburg to listen. The legislature must stand with workers and raise Pennsylvania’s minimum wage.”

New Overtime Rules. In addition to fighting for a minimum wage increase, more than 82,000 workers will get the pay increases if new overtime rules submitted by the Wolf Administration are approved by the Independent Regulatory Review Commission (IRRC) on Jan. 31. That is in addition to the 61,000 Pennsylvania workers who became eligible for time-and-a-half pay when new federal rules took effect Jan. 1 for workers earning less than $35,568.

The governor’s proposal would require overtime pay to most full-time salaried workers in executive, administrative, and professional jobs if they make less than $45,500 by 2022. With the combined rule changes, an estimated 142,000 more workers will be eligible for time-and-half pay compared to last year.