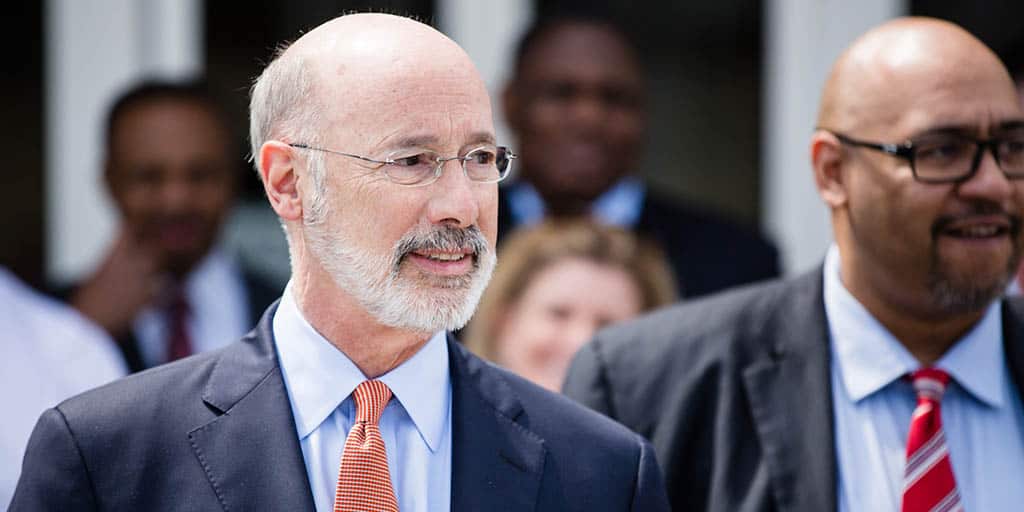 Harrisburg, PA – Governor Tom Wolf today participated in a press conference to celebrate the one-year anniversary of signing Clean Slate into law and to announce that automatic sealing of criminal records begins today.

“Today, as the Clean Slate provision for automatic record sealing goes into effect, we will be freeing thousands of people from the handcuffs of history,” Gov. Wolf said. “These are people who have spent 10 years or more without re-offending or in some cases who were never found guilty or had their charges dropped.”

“These are people who couldn’t shake the stigma of making a mistake because our faulty criminal justice system didn’t allow them to. I’m proud of the work we’ve done with the General Assembly and the legislators here today to right this wrong.”

Gov. Wolf spoke at a press conference organized by Justice Action Network and Community Legal Services where legislators, criminal justice advocacy groups, attorneys, and people affected by Clean Slate spoke about how the law is being implemented and already helping thousands wipe clean past criminal records to remove barriers to employment, housing, and education.

“Number one. Thirty million. Today is a milestone for Pennsylvania because of these two numbers,” said Jenna Moll of Justice Action Network. “Pennsylvania has become number one in the nation, the first state to provide automatic sealing of certain low-level criminal records, eliminating the complicated and often prohibitive process of seeking a court order to seal a minor record in one fell swoop. Within a year’s time, 30 million of these records will be sealed in Pennsylvania’s court system, improving the lives of countless citizens and breaking down barriers to employment and productive lives.”

Around one-twelfth of those 30 million cases will be sealed each month, starting with the most recent cases. This means that all non-convictions from the past 10 years will be sealed over the next few months, before any convictions will be sealed. The courts will be generating individual orders when cases are sealed, which the people whose cases have been sealed can retrieve at the county courts if they would like to have them.

“Governor Tom Wolf, Rep. Sheryl Delozier, Rep. Jordan Harris, Sen. Anthony Williams, former Sen. Stewart Greenleaf, and other champions worked together to achieve this victory, and together are showing the people of Pennsylvania that this state seeks to be the home of redemption and rehabilitation,” Moll said. “The Justice Action Network commends these leaders for this remarkable achievement and stands ready as Pennsylvania continues its work towards a smarter and more effective criminal justice system.”

“June 28 will be a banner day for this nation,” Sharon Dietrich, Litigation Director, Community Legal Services, said. “It is not only the first day on which criminal cases will be sealed by automation in this country, but when the 2.5 million cases are sealed in our 67 counties this month, that number may surpass all of the cases ever sealed in the United States. And 11 more months of the same will follow. I am so proud that Pennsylvania has pioneered automated sealing to so powerfully provide second chances to our friends and neighbors.”

Since Clean Slate went into effect in December 2018, more than 8,300 people have sought help from CLS and the PA Bar Association on MyCleanSlatePA.com, which offers free legal counseling via an easy-to-complete online form. The site, with more than 31,000 visits, also explains the Clean Slate process and offers links to look up a public court record.

CLS recently posted a video on Clean Slate to help people take action and learn if the new law is right for them.