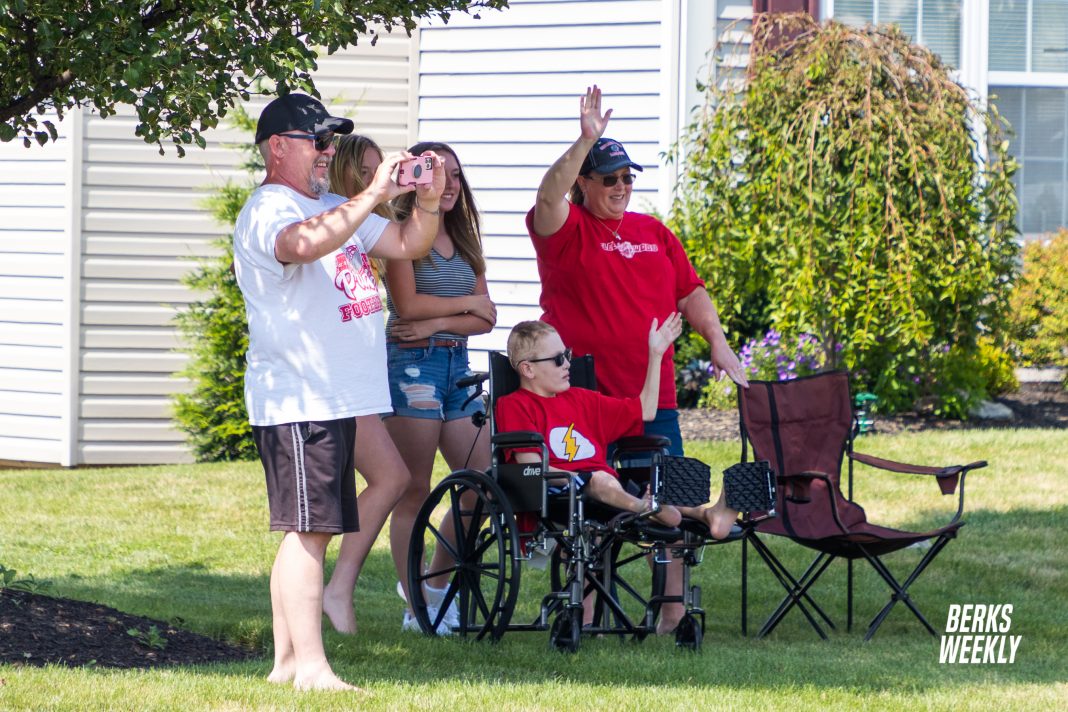 Kolby Doerr, a 13-year-old boy in Blandon, has been in the fight of his life for the last year. After multiple trips to the hospital, Kolby was recently diagnosed with Osteosarcoma, a type of bone cancer that begins in the cells that form bones.

Following an 11 week stay at the Children’s Hospital of Philadelphia, Kolby was able to return home for a short time this past week. On Sunday, unbeknownst to the Doerr family, the community gathered for a special drive by parade to welcome him back home.

Planned by long time family friend Tricia Jones Devlin, Kolby, his parents and two sisters stood out in their front lawn as a parade of roughly 50 cars, including members of the Northern Berks Regional Police Department, Blandon Fire Department, and characters from Zoo Much Fun drove through the small neighborhood.

“I wanted to show some love” said Devlin as she stood on the sidewalk watching the parade of cars. “He’s been in the hospital for so long, I felt it was important to do something so he could feel the presence of everyone pulling for him.”

“Ever since birth, he’s had multiple medical conditions and surgeries” shared Katrina Doerr, Kolby’s mother. Last summer, Kolby broke his leg jumping out of a tree while at a Lacrosse game. “It did heal well, and we kept going back to get X-rays.”

Due to a previous medical condition which affects Kolby’s eyesight, the process to receive an MRI was lengthy. Following the results of testing, doctors found he had Osteosarcoma at the bottom of his Tibia, which has since metastasized to his lungs.

“This is overwhelming for us” Doerr said. “Just to see everyone show up for him, knowing he can’t see, it was great having Fire an Police honk their horns. He was waiving and aware of what was going on, which made my heart melt. I saw that and I know everyone cares.”

Doerr says if all goes well, Kolby will be home for the next week. However, he is scheduled to return to CHOP for the next several months to receive chemo treatments and eventually undergo surgery to amputate his right lower leg.

The family has setup a fundraiser to help with medical costs: https://www.gofundme.com/f/please-help-the-doerr-family