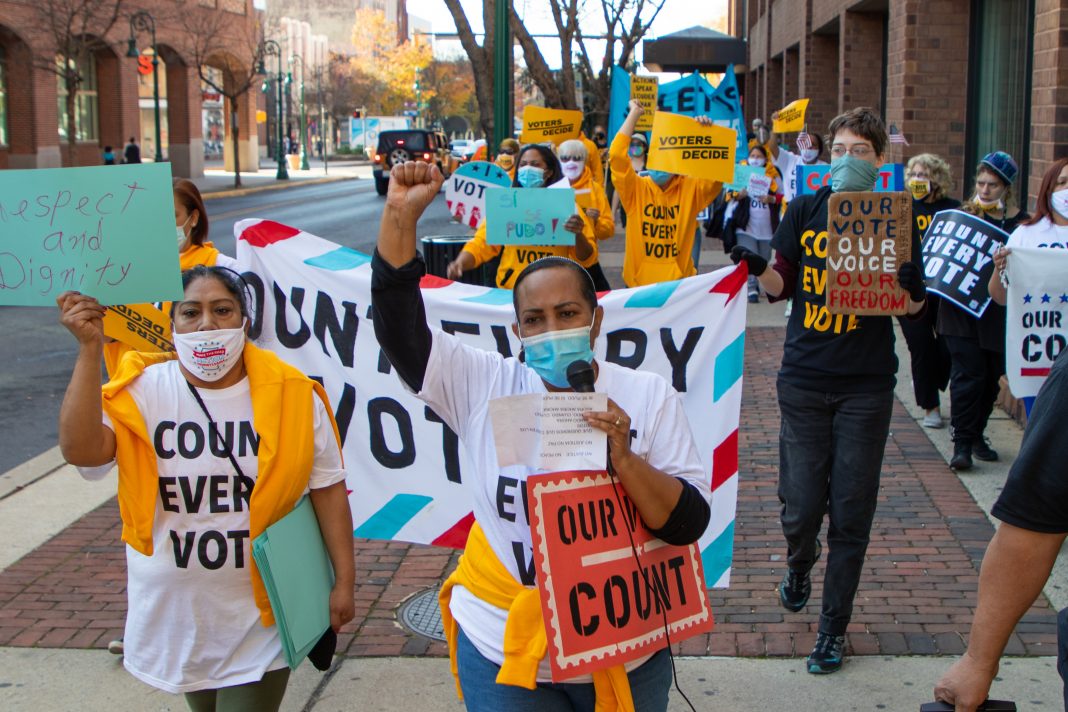 For the second time this week local community groups have gathered in Downtown Reading for a “County Every Vote” rally. This time, the groups marched to the Berks County Services Center, DoubleTree Hotel, and 5th and Penn Street.

According to organizers, the group lead the march to demand the Berks County Board of Elections to count every vote cast in the presidential election.

“As millions of ballots continue to be counted across the country, President Trump called for stopping all vote counts, falsely claimed to win electoral votes and urged his supporters to fight back” said organizers.

Make the Road Pennsylvania, the largest Latinx organization in the state with more than 10,000 members, has prioritized voter education and engagement to ensure Latinx, Black, and young voters cast their ballot free from intimidation.

“The election in Pennsylvania has been attacked by President Trump for months, and we will not allow intimidation, threats, or false claims of victory to derail the counting process or silence our voices” said Patty Torres, Organizing Director of Make the Road Pennsylvania.

“Every vote waiting to be counted was cast by a real person whose voice must be heard. Movements fought for and won our right to vote and we’ll be in these streets until every vote is counted and every voters’ right has been protected.”

“Trump has tried to bully and cheat his way through an election he knows he’s losing,” said Jane Palmer, founder of Berks Stands Up.

“But from our nation’s founding, Americans of every race and creed have fought together for democracy against petty tyrants, and time and again we’ve won. Protecting the results of the election is crucial, no matter what party one supports.”

Troy Turner, Sunrise Berks leader also added, “We stand united to ensure that every voice is heard and every vote counted until we swear in a government of, by and for the people.”