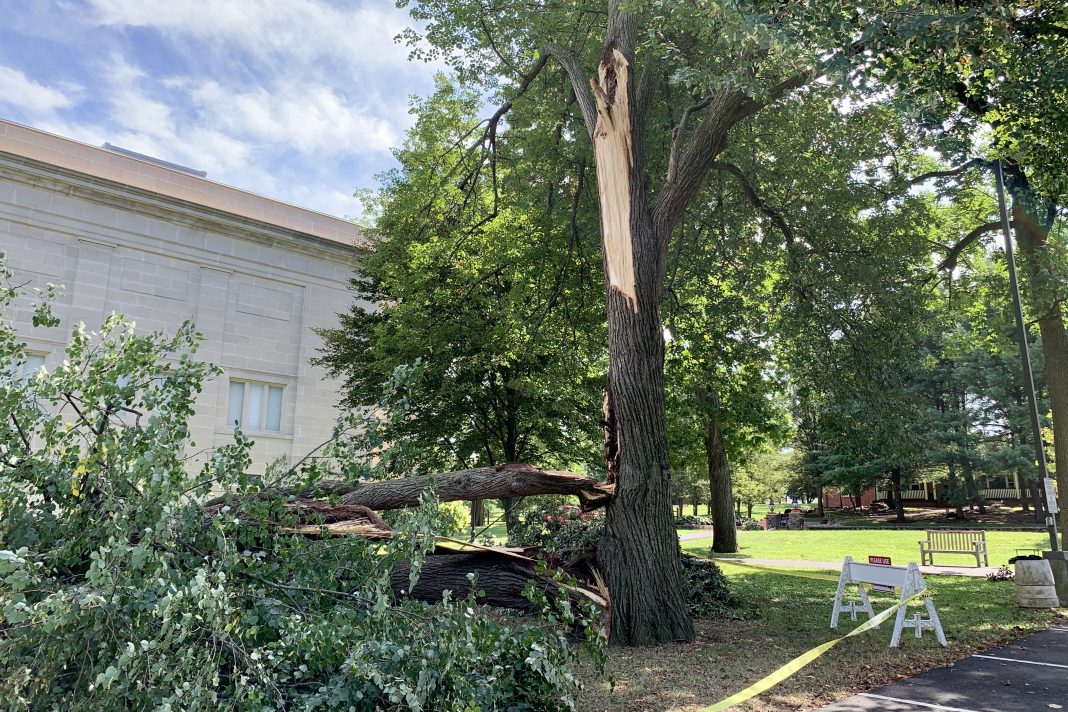 “Little Leaf Linden”, the beloved tree that was the scenery for years of Father’s Day concerts at the Reading Public Museum collapsed sometime during the early hours of September 4th.

The Linden tree was planted along with most of the original Arboretum specimens when The Museum moved to its present location in the 1920’s. Upon collapse, the tree landed on a nearby sculpture, Troy, by Carol Kreeger Davidson (1929-2014), and damage to that piece is being assessed by The Museum’s curatorial team.

The Linden has had a history of needing maintenance and upkeep. In June of 2009, an arborist identified splitting in the tree’s trunk. In 2010, to save the tree from further damage, or needing to be removed entirely, cabling was installed in the tree’s top to hold branches together while steel rods were inserted through the trunk to immobilize the fracture to prevent further splitting. The work was completed with funds donated by Theresa J. Harenza in memory of her husband, Joseph M. Harenza, Sr.

Upon learning of the tree’s collapse, current Foundation for the Reading Public Museum Board Chair, and son of Theresa J. & Joseph M. Harenza, Sr., Charles Harenza, Esq., stated, “Although many Berks Countians, my parents among them, have fond memories of The Museum and concerts held under the Linden tree, clearly the age of the Arboretum and the continual work needed to address these types of issues is something the Foundation needs to continue to carefully review. The hundreds of thousands of dollars spent in recent years to deal with aging trees, flooding creeks, and vandalism diminishes our ability to focus on The Museum’s primary mission, and that is a real concern.”

Director and CEO of The Museum, John Graydon Smith, estimated that the entire clean-up and restoration caused by the Linden tree’s collapse could approach $25,000. Smith noted, “While we continue to budget for tree removal and replanting, the natural disasters in the past two summers alone have caused damage that is nearly impossible to recover from. The current restrictions placed on our operations will only further exacerbate our already stressed resources.”

The Linden provided shade for Father’s Day concerts dating back to 1954 when the Reading Woodwind Quintet performed annually at the Reading Public Museum. The concerts, now performed by the Reading Philharmonic, were forced to move to a new location at The Museum in 2010 due to the aging of the tree. In 2020, the concert series was cancelled due to the COVID-19 pandemic.

The Museum, Neag Planetarium, and Arboretum remain open to the public and no events have been cancelled or rescheduled due to the tree’s collapse. Some restrictions to parking areas and portions of the grounds are in place as crews work to remove the debris and remaining tree.

GRCA staffer appointed to PACP Board of Directors