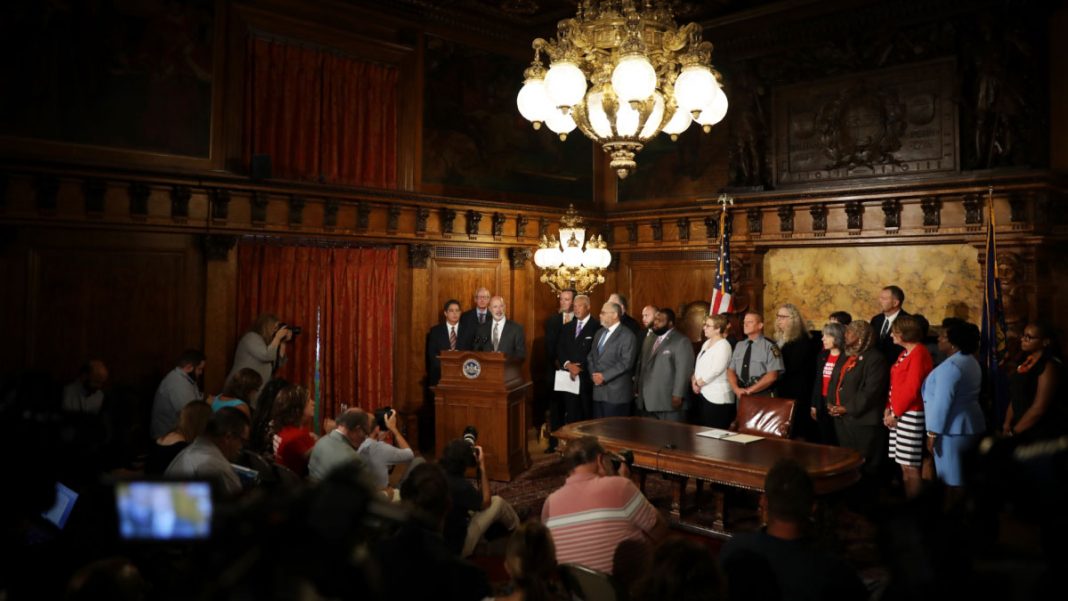 Governor Tom Wolf signed an executive order making unprecedented sweeping changes to executive branch agencies and programs to better target the public health crisis of gun violence in Pennsylvania. He was joined by advocates, legislators, cabinet secretaries and Charles Ramsey, chair of the Pennsylvania Commission on Crime and Delinquency (PCCD), who will use his expertise in a new role advising the executive branch on implementing these changes.

“Too many Pennsylvanians are dying from gun violence. We need to fix our weak gun laws and pass reforms focused on increasing safety and reducing danger to our citizens.” Gov. Wolf said. “The action I am announcing today includes provisions for Pennsylvanians of all walks of life and looks at gun violence from all angles.”

The governor’s executive order names Ramsey as a senior advisor charged with coordinating and facilitating gun violence reduction. Ramsey will lead a new Office of Gun Violence Prevention within the PCCD, and the office will contain a Special Council on Gun Violence tasked with meeting within 60 days to begin developing a plan to reduce gun violence in our commonwealth.

The executive order also creates the Division of Violence Prevention within the Department of Health. The two new offices will work together to tackle gun violence from both the gun safety and public health perspectives. Together, they will establish new oversight and data sharing, reduce community gun violence, combat mass shootings, and halt domestic violence-related and self-inflicted shootings.

“I am honored to be asked by Governor Wolf to chair the Special Council on Gun Violence and serve as his senior advisor,” PCCD Chairman Charles Ramsey said. “I look forward to developing recommendations to reduce and prevent gun violence – in all its forms – throughout Pennsylvania. The opportunity to explore gun violence in its totality is a unique challenge, but I am confident that the Council, the Office of Gun Violence Prevention at PCCD, and the Division of Violence Prevention at DOH will be up to that task.”

More than 1,600 people died in Pennsylvania from gunshot wounds in 2017, a rate above the national average. While all types of violence must be addressed, guns account for the weapon used in 74 percent of all homicides and 52 percent of fatal suicides in Pennsylvania. The spikes in gun violence have led to billions of taxpayer dollars going toward efforts to increase security in schools and other public places and provide medical care to survivors, while families and communities have suffered invaluable losses when loved ones die of senseless gun violence.

Gov. Wolf recognizes that executive action alone cannot end gun violence in Pennsylvania. In addition to his call for a federal assault weapons ban, he will also call upon the General Assembly to pass safe storage legislation to reduce the number of accidental shootings, the Extreme Risk Protection Order Act, also known as the red flag law, lost and stolen gun reporting, and universal background checks by the Pennsylvania State Police on all gun purchases.

“It is my honor and my duty to guide our commonwealth to a place where residents are not dying from gun violence while also upholding rights,” Gov. Wolf said. “By finding the right middle ground, we can create the best Pennsylvania; one of freedom without fear. The conversation of where this middle ground lays is ongoing, and I look forward to continuing it with the legislature as we move into the start of the fall session.”

Read the full text of the executive order here as a PDF scribd.com/Reducing-Gun-Violence.pdf