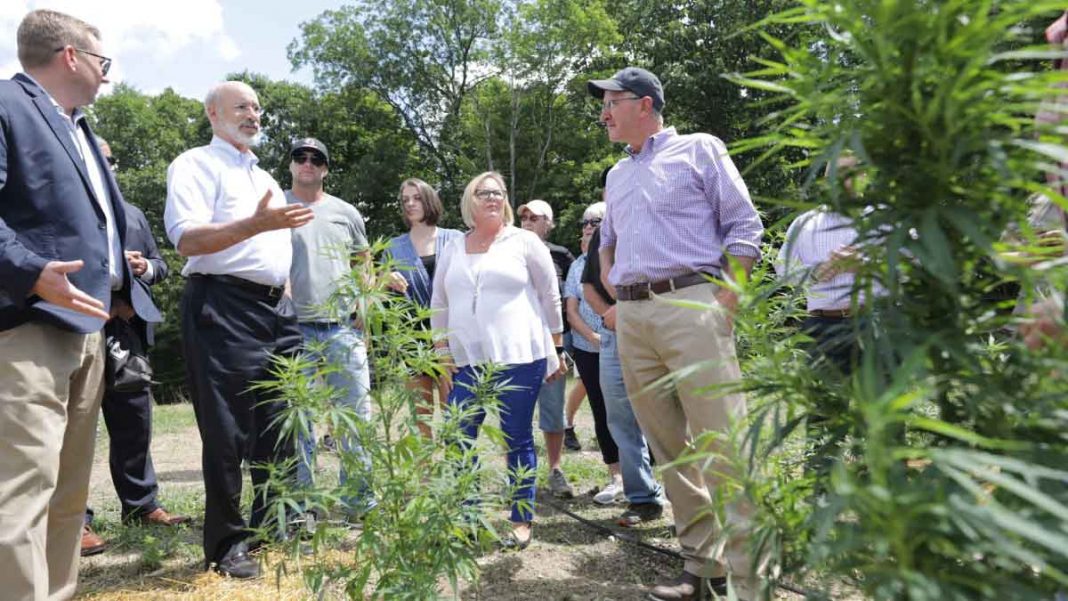 During a visit to a hemp growing site in Blair County today, Governor Tom Wolf and Agriculture Secretary Russell Redding highlighted the opportunities available to hemp growers and processors across the commonwealth.

“Pennsylvania has a tremendous opportunity to capitalize on a new and in-demand market for hemp,” said Gov. Wolf. “This is a versatile product with many uses, and it’s a product that consumers want.”

This year, the Pennsylvania Department of Agriculture issued more than 300 permits on nearly 600 acres at more than 800 different growing locations.

“Hemp is a new, old crop that has the potential to make a big impact on Pennsylvania’s agricultural – and economic – landscape,” said Sec. Redding. “It’s a crop with both a rich history and a bright future here in the commonwealth.”

This summer, Gov. Wolf signed the PA Farm Bill, a piece of which will create a state-level Specialty Crop Block Grant Program to invest in and encourage farming of high-priority crops like hemp. Eligible projects must enhance the competitiveness of specialty crops by improving distribution, efficiency, or research to boost consumption of goods.

Hemp was grown in Pennsylvania and throughout the United States until after World War II but became regulated along with marijuana and its cultivation was prohibited. Hemp and marijuana are different varieties of the same species of plant. Unlike marijuana, hemp is grown mainly for fiber and seed and must maintain a much lower concentration of the psychoactive chemical tetrahydrocannabinol, or THC, below the 0.3 percent legal threshold.

Pennsylvania recently made hemp subject to the Controlled Plant and Noxious Weed Committee, created under Act 46 of 2017. With the committee’s approval, hemp was designated a controlled plant, which requires all growers to register and obtain permits through the department.