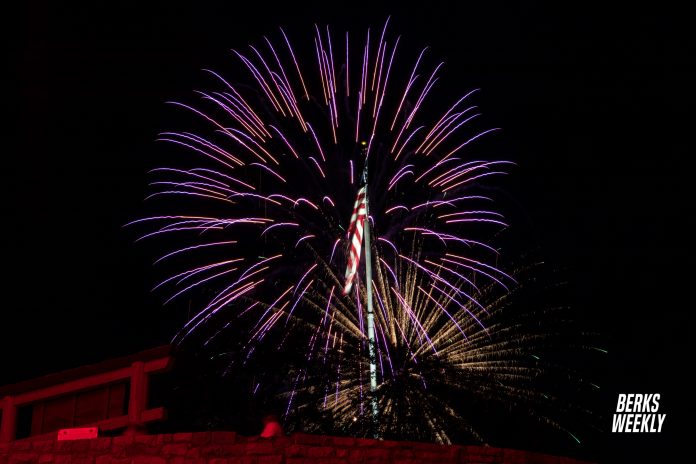 The skies above Reading lit up with color and noise Saturday night as Berks County residents celebrated the 4th of July.

In the City of Reading, a professional fireworks display was held near the Pagoda on Skyline Drive. Presented by local AM radio station, WEEU 830, the display began at 10pm, and lasted 15mins.

In addition to the professional fireworks display on Mt. Penn, many residents took it upon themselves to create their own fireworks show at home. According to the Berks County Department of Emergency Services, between 8pm and midnight 911 dispatchers received over 700 phone calls, a majority related to loud fireworks.

This video, captured by one of our followers, shows a massive fireworks display launched from the 400 block of North 13th Street, directly across the street from a gas station. Police did arrived shortly after, and the group responsible was seen cleaning up the used fireworks boxes.

The view from Mt. Penn Shows the increased usage of consumer fireworks in the City of Reading. This view is the south side of Reading, with Cumru Township in the distance.

Emergency crews were kept busy throughout the night. Several mulch, tree, and dumpster firse were reported throughout the City of Reading, Wyomissing, Sinking Spring, and in Lower Alsace Township.

At 11pm, a dumpster was reported around 11:30pm at 13th and Union Elementary School. Located next to the building, fire crews quick extinguished the fire.

A brush fire was reported in Lower Alsace Twp on Skyline Dr below the fire tower. Crews arrived to find a 15×15 foot area on fire. The fire was put out, and it is unknown how it started.