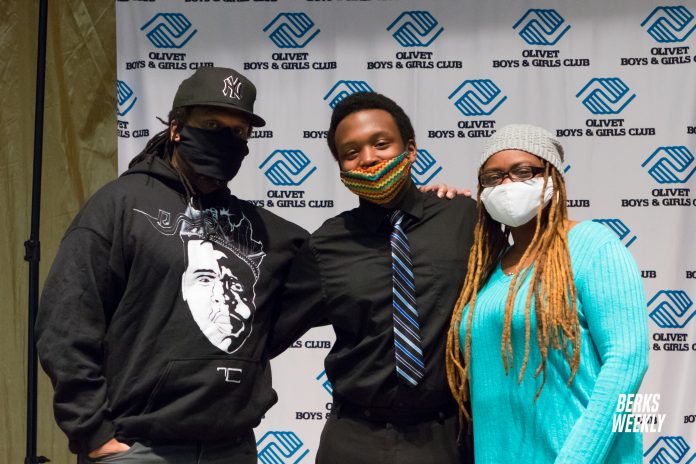 President and CEO, Chris Winters, made the announcement and other Olivet staff in attendance included Center for the Arts Director, Richard Bradbury, who has served as a mentor for Aaron since he started taking classes at the CFA at a young age. Aaron Oliver was also in attendance at the press conference alongside his proud parents, Tameeka Gomez and Aaron Oliver, Sr.

“Youth of the Year” is the highest honor that a club member can achieve as a result of their leadership skills and contribution to the club and surrounding community. The Olivet Boys & Girls Club’s Youth of the Year will move on to participate in the Pennsylvania state-wide competition, which will be held virtually this year on May 6th, with selected youth from other Boys & Girls Club organizations.

“It is a true honor to have Aaron represent our organization as he moves on to the state competition. He is an exemplary model of what it means to be a mentor and lead by example. We wish him the best and know that his future is bright” says Chris Winters, President and CEO, Olivet Boys & Girls Club

Aaron is an 11th grade student at Reading High School and has been an Olivet Club member since he was six years old. Taking classes at the Center for the Arts, he quickly became a regular student and performer on the stage. He participated, enthusiastically, in all the CFA classes: Kids and Teen Chorus, Drop Da Beat, Drumming and Wonta Nara, Art, Keyboard Kids Dance and Tap!

A talented performer in front of 50, 100 or 500 people, he began learning guitar through the CFA Guitar Club at age nine. Aaron is described as the “heart and soul of Olivet’s peer-to-peer drug and alcohol prevention performance ensemble” and his director says Aaron is “the reason Berks PRIDE constantly has a stream of new teens joining the group.”

Habitat Berks Celebrates a New Family in the Buttonwood Neighborhood