Draw the Lines PA Brings the ‘Voteswagon Tour’ to Reading 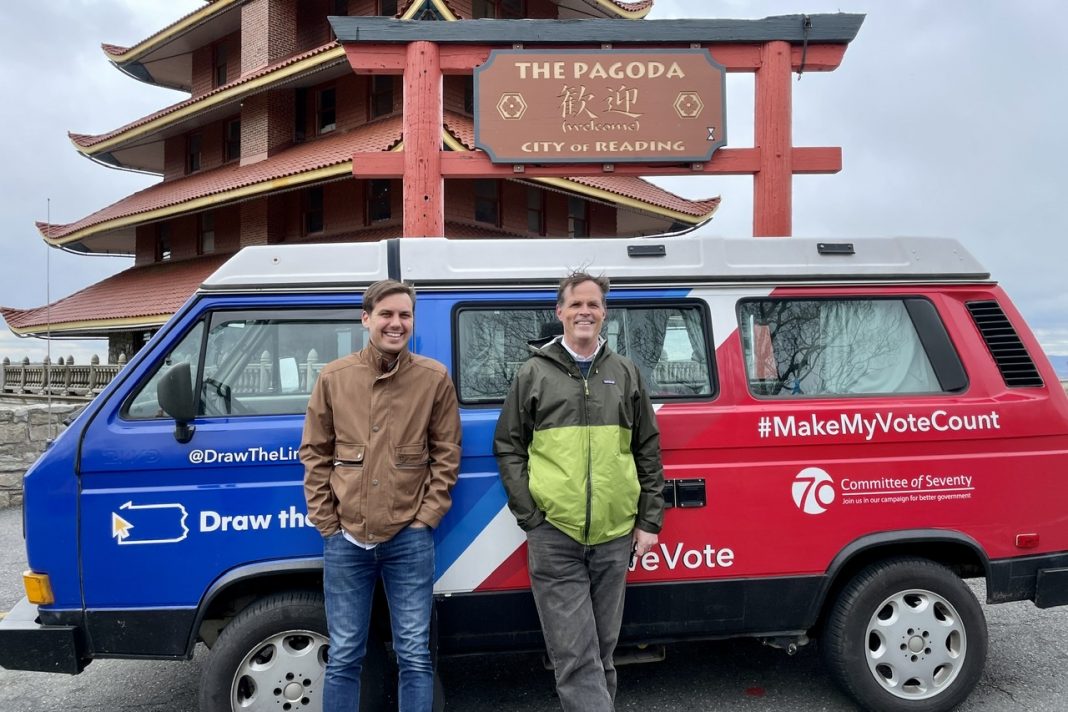 Draw the Lines PA, a statewide civic and education initiative of the Committee of Seventy, continued its four-week Great Pennsylvania Voteswagon Tour of 2021 in Reading today, meeting with Pennsylvanians to discuss the upcoming redistricting process, call for citizens to become active in that process, and encourage the state’s Legislative Reapportionment Commission to be aggressively transparent.

David Thornburgh, President and CEO of the Committee of Seventy, said during stops in Reading, “Redrawing legislative lines happens once every ten years. How it is done has a tremendous impact on everyday Pennsylvanians and the communities they live in.”

Thornburgh added, “From determining who represents you in Harrisburg and Washington, D.C., to distributing funding, to ensuring that elected officials actually represent the needs of the communities in which they live — how and who draws our lines matter.”

Today, the Great Pennsylvania Voteswagon Tour first stopped at the Reading Pagoda. With the Pagoda as a background, the tour focused on gerrymandering in Berks County, which has a population of only 420,000, but was broken into four congressional districts from 2012-2018.

The Voteswagon then continued to the Daniel Boone Homestead in Exeter Township, a township of 25,000 people, that Thornburgh says should fit nicely into a single state House district (~62,000 people) but is instead split into three districts – the 5th, 128th, and 130th.

During the tour, Thornburgh placed a spotlight on the appointment of the fifth member of the state’s Legislative Reapportionment Commission. The fifth member serves as chair of the five-member commission. The other four members include the majority and minority leaders of both chambers of the Pennsylvania General Assembly.

“Thousands of Pennsylvanians called on the LRC to accept applications from everyday Pennsylvanians for the fifth spot, and they listened,” said Thornburgh.

“We are grateful that the LRC has accepted online applications. This year, we anticipate multiples more Pennsylvanians — Republicans, Democrats, and Independents — submitted their names compared to 2011. We are now calling on the LRC to turn the cameras on and have a transparent selection process.”

Draw the Lines PA has launched an online petition urging the LRC to make the entire redistricting process open and transparent by livestreaming every future meeting of the LRC. The online petition can be found at drawthelinespa.org/petition.

“Draw the Lines PA has done an amazing job engaging hundreds of young Pennsylvanians in drawing their own congressional and state legislative maps,” said Kevin Murphy, President and CEO of Berks County Community Foundation. Murphy serves on the state steering committee of Draw the Lines PA.

“These map drawers have demonstrated that fair maps are possible when you take politics out of the equation.”

Throughout April, the Voteswagon will make dozens of stops across Pennsylvania. It will spotlight the iconic landmarks and distinctive local attractions that define the Keystone State’s communities.

These landmarks are authentic places and attractions that local Pennsylvanians know and trust. It’s in that same spirit that Pennsylvanians want their voting districts to be drawn, as the Commonwealth undergoes the redistricting process in 2021.

Earlier this week, the Voteswagon made stops at local landmarks in Allentown, Bethlehem, Scranton, Wilkes-Barre, and Clarks Summit.

The Voteswagon is a 1991 Volkswagen Westfalia camper that serves as a rolling billboard for the Committee of Seventy’s civic awareness efforts.

The Voteswagon will be driven around the state by David Thornburgh, the president and CEO of the Committee of Seventy. Thornburgh, the son of former Pennsylvania Governor Dick Thornburgh, has led the effort to raise awareness about the issue of legislative gerrymandering in the Commonwealth.