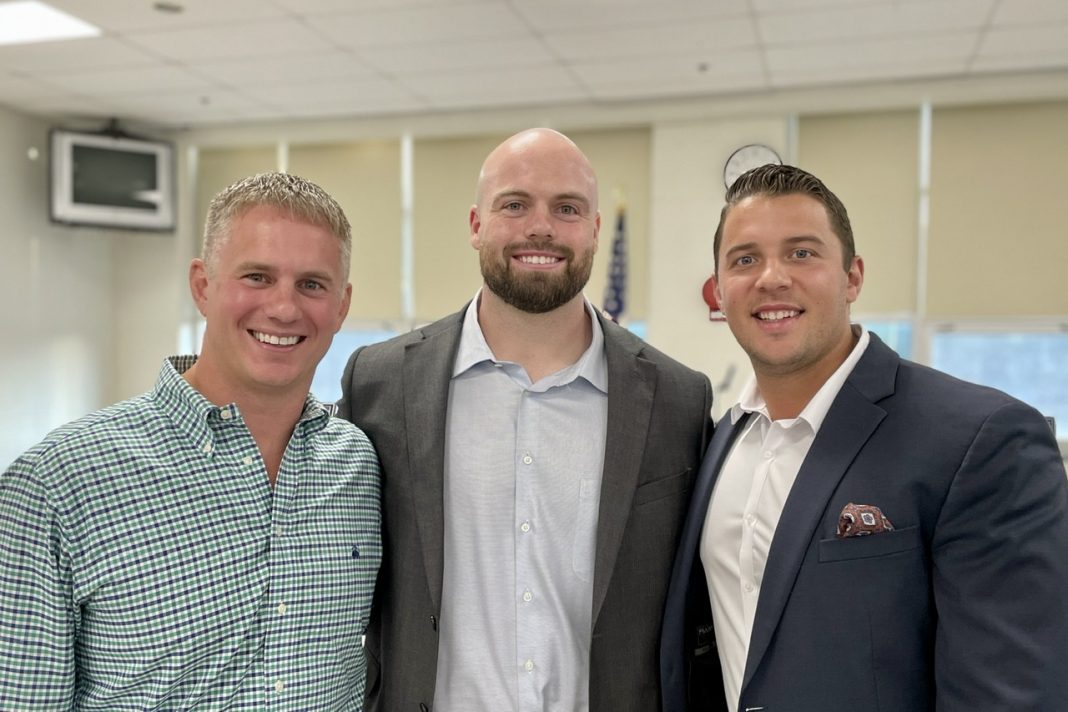 The Exeter Township School District inducted three athletes into their 2022 Athletic Hall of Fame during a ceremony held Friday evening at the Senior High School.

Athletes honored this year are Michal Menet, a 2016 graduate; Michael Troutman, a 2002 graduate; and Kyle Yocum, a 2013 graduate.

He was named an Under Armour All American in 2016. He also played basketball, and was a three-year letterman. In 2013 and 2014, he was All-Conference Basketball. He went on to Penn State University where he was a three-year starter, two-time Team Captain and received All Big Ten honors in 2019 and 2020. In 2019 and 2020 he was the Dick Maginnis award winner for PSU Outstanding Offensive Lineman and was named to the Rimington Trophy Watch List for Outstanding Center. He was invited to the 2021 Senior Bowl. In 2021, he was drafted by the Arizona Cardinals in the 7th round with the 247th pick. He signed with the Green Bay Packers in December 2021.

Troutman excelled in both football and wrestling. In his senior year, he had 1,026 rushing yards and 15 touchdowns. At the time, he held a single game rushing record of 224 yards and five touchdowns against Twin Valley. He had over 2,000 career all purpose yards and 25 total touchdowns. He was named to the All Berks 1C 1st Team as a running back in 2001. On the mat, he had a career 50 pins, with a 94-30 record. He was the 2002 Sectional Champion.

He was selected in both 2000 and 2001 to the All Berks Section 1 1st Team. He went on to wrestle at Ursinus, where he had a 136-19 record and 61 career pins. He was a four-time Centennial Conference Champion, being only one of six to do it and a four-time NCAA Qualifier. He was a two-time NCAA All American, finishing 8th place in the country in 2005 and 5th place in the country in 2006. In 2006, he was named an NCAA Academic All American.

Yocum played football, baseball, basketball, and competed in track and field. He was the first freshman to start at quarterback in school history and earned the title of Exeter’s all-time leading passer with 43 starts, 3,815 yards, and 38 touchdowns in his career. He ranks in the top 20 all-time in Berks County in passing. He also rushed for 1,955 yards and 27 touchdowns for his career. He earned the Outstanding Junior Award in 2011, All-League honors in 2012 and was a four-time academic selection.

He led his team to two District playoff appearances. He went on to play at Delaware as a fullback where he was selected as a Captain for the 2017 season. He played in 40 career games, recording three catches for 22 yards, four kick-off returns for 60 yards and five tackles.