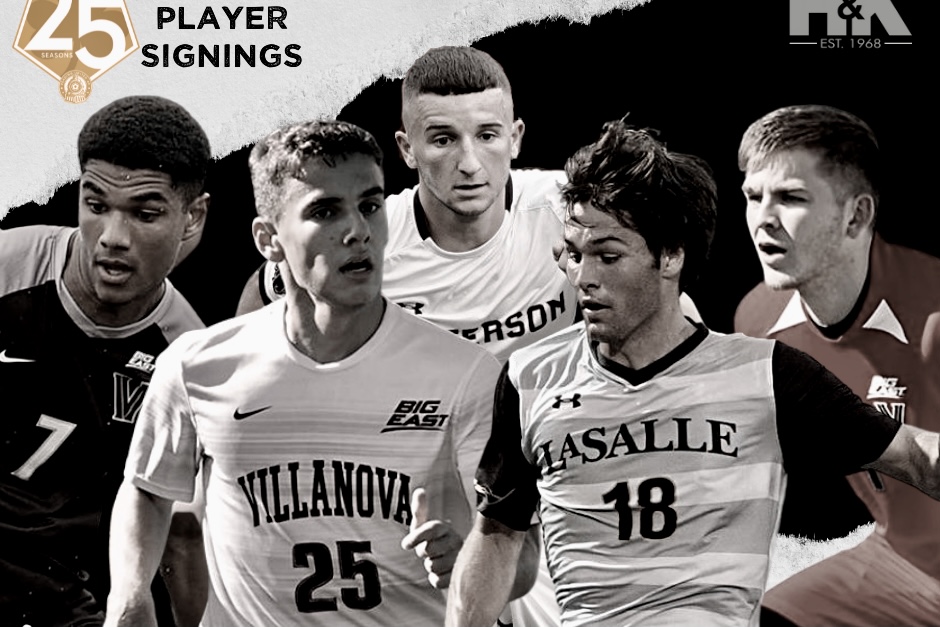 Reading United announced five more signings to their 2021 squad, all coming from Philadelphia-based schools. Carson Williams, Lyam Mackinnon, and Marcus Brenes all hail from Villanova, while Charlie Livesey plays for Jefferson, and Ike Hollinger does work for La Salle. All five players are currently pending league and federation approval.

Williams comes into Reading with the reputation as one of the BIG EAST’s top goalkeepers. The Plano, Texas native backstopped the Wildcats to the nation’s top save percentage (.849), logging virtually every minute that Villanova has played over the past three seasons. Williams holds the ‘Nova record for shutouts in a season with nine. He was a member of the USA U18 National Team Pool while in high school.

Mackinnon is a skilled forward who nabbed Philly Soccer Six All-Rookie team accolades in his first season. The Lausanne, Switzerland native also led the team in goals and assists during ‘Nova’s abbreviated 2020-21 campaign, scoring two goals with two dimes on 30 shots. He previously excelled as team captain of the Lausanne-Sport U18 and FC Lausanne U21 sides.

Brenes is a quality athlete who excels in the center of the pitch from his midfield position. The Wayne, NJ native started all ten games for the Wildcats this past season, on top of the 17 games he played in 2019. He was also a three-year captain and four-year starter with PDA Academy Team, guiding his club team to the USSDA playoffs in each year he was involved. Brenes shines as a free kick specialist, creating opportunities off of restarts.

Livesey is coming off of a stellar career on the left flank at Jefferson, where he was All-CACC and D2CCA All-East Region during the 2019 season. The Sandbach, United Kingdom lad finished his collegiate career with 31 goals and 47 assists in 75 games between Jefferson and Genesee Community College.

During his final season in JUCO, he scored 17 goals with 26 assists – breaking the single-season assist record for the school, and setting the mark across all of NCAA, NAIA, and NJCAA in 2017. His final season in Batavia landed him as First Team All-Conference, All-Region, NJCAA All-American, and USC All-American.

Hollinger is a junior forward for La Salle, who previously played for PA Classics. The Mountville, Pa. native has played in all 46 games the Explorers have played, making 39 starts. Across three seasons, he has scored four goals with seven assists, taking 57 shots. The striker will have a chance to make his mark and continue his noted improvement over the past few seasons for La Salle.