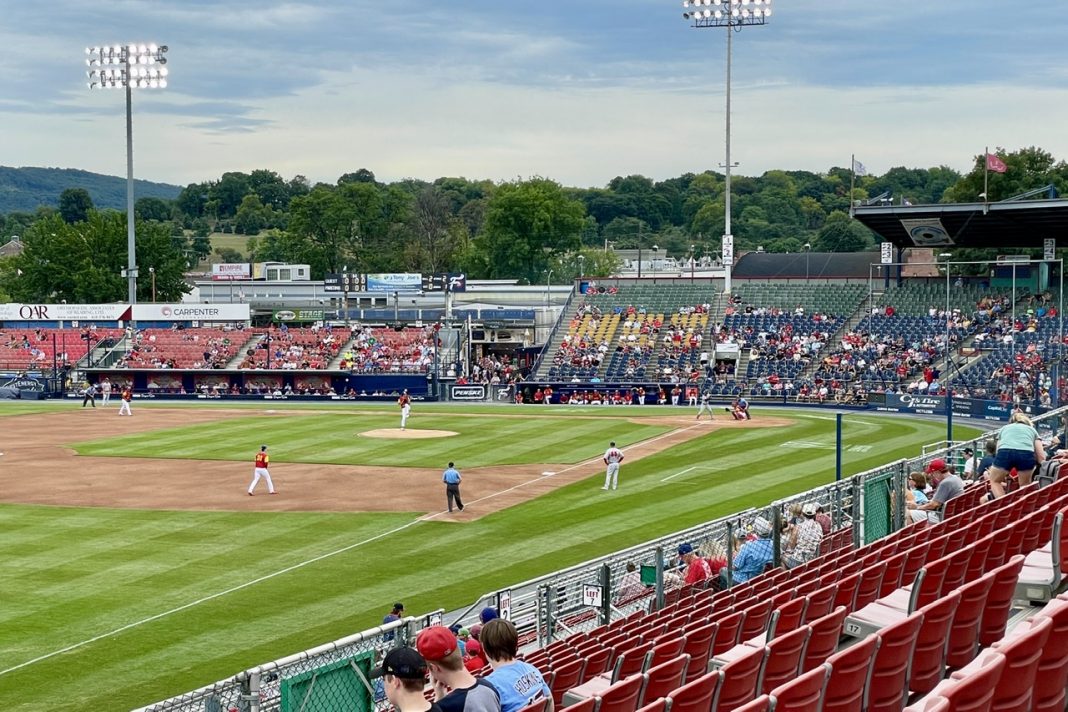 The Reading Fightin Phils have announced their end-of-season player awards with their homestands complete. Below are some of the biggest contributors to the R-Phils in 2022.

The Phillies #5 prospect Johan Rojas is the Pepsi Stolen Base leader for the R-Phils. He has stolen a combined 60 bases in 64 attempts, so far, between Jersey Shore and Reading this summer. In Double-A, he snagged 28 bags after a midseason callup. This is almost double the amount of any other year in his career and double any other player in the organization. His elite speed allowed him to secure extra bases, move into scoring position, and consistently manufacture runs throughout the season. Rojas has also played the most games, 125, out of any Phillies affiliate player. He has 128 total stolen bases in his four-year professional career. He’s the first Phillies minor leaguer since 2009 (Anthony Gose, 76) to steal more than 50 bases in a season. The 22-year-old was signed as an international free agent in 2016 out of the Dominican Republic.

Righty Noah Skirrow led the way for the R-Phils starting rotation this summer, becoming the team’s strikeout leader. Skirrow tossed 98.2 innings in 21 starts, recording 115 strikeouts along the way. He only walked 32 batters. With six shutout innings and four K’s in Triple-A after his call up on September 5th, Skirrow is now second overall in the entire Phillies farm system in innings pitched and fourth in punchouts. He was signed as a free agent in 2020 out of Liberty University. He hails from Cambridge, ON, Canada.

The Fightins have named Aldrem Corredor the Clutch Player of the Year as he leads the team in runs batted in with 67. When it comes down to the wire, Corredor is the man you want coming up to the plate. He’s had numerous plays this summer that prove his excellence in crucial situations. Corredor rocketed a grand slam June 8 and a walk-off sac fly on August 24. He’s had the game-winning home run twice this summer. Corredor also completed a triple play for the R-Phils, recording the final out at first base.

He has knocked 89 hits in 104 games for Reading, despite missing almost three weeks to start the season. It’s a banner year for Corredor with 14 home runs, 5 more than any other season in his nine-year career. He also had 12 doubles. He knows the meaning of clutch, posting four sac flies and one sac bunt this season. Aldrem’s recorded 18 multi-hit contests and 19 multi-RBI games to lead the team. He is 8th in games played in the Phillies farm system, covering both the outfield and first. With an impressive arm, he’s garnered three outfield assists, all from left. He holds a .987 fielding percentage, making just five errors in 427 total chances this season.

Corredor signed as a free agent with the Washington Nationals in 2012 and spent his entire career there until this point.

The R-Phils have named Vito Friscia as the Broadway Charlie Wagner Unsung Hero for the 2022 season. From the first day of the season, until his promotion to Triple-A on September 1st, Friscia has been a difference maker for Reading. Asked to step outside his usual role as a catcher early on, Friscia stepped up and took up stake in the outfield. He played in ten games in the corner positions, recording zero errors and making three assists to nab runners on the basepaths. He also spent four games at first base. As a catcher, Friscia caught three runners stealing in 24 games. His strong baseball knowledge and eye for the game, makes him successful behind the backstop calling the game.

Up at the plate, Friscia had a career year with 16 doubles and ten homers, even recording one triple. He batted .245 in 83 games, driving in 39 runs and scoring 37. His patience at the plate was rewarded, taking 56 walks, and at times even leading the Eastern League in that category. He has both a 16-game and 19-game on base streak during the season. Some of his highlights include having two hits in the same inning, leading off a game with a home run on the first pitch, and being a part of two back-to-back home runs with teammates.

Vito was there every step of the way for this team, doing what was asked of him and more. He put in extra time to help his pitchers get ready, catch bullpens, and take early hitting work. However, the unsung hero is not just about his work on the field. Friscia was a light-hearted, positive presence and incredible teammate in the clubhouse and in the dugout. Despite being in just his third professional season, he was a leader on a younger team down the stretch.

Friscia was drafted in the 40th round in 2019 out of Hofstra University. He hails from Bethpage, New York.

Righty reliever Billy Sullivan is named the FirstEnergy R-Phils Pitcher of the Year. He had an impressive year with the Fightins after landing on Reading’s Opening Day roster. He’s recorded five wins and two saves, consistently coming out of the bullpen in late and close situations. He also filled in for two spot starts when Reading tossed a bullpen game. Sullivan finishes with a 4.20 ERA in 49.1 innings thrown. He’s notched 74 strikeouts. Sullivan’s best month of the summer came in July when he boasted a 0.96 ERA, allowing just one run and striking out fifteen. To cap off the homestand, Sullivan entered with the bases loaded and just one out on Saturday. He struck out a batter and induced a groundout to get out of the inning clean. He came back and struck out the side in the ninth to keep things tied up, allowing his team to go and get the victory. Sullivan was signed as a free agent in 2020 out of the University of Delaware. He grew up a Phillies fan in New Castle, DE.

Phillies #17 prospect Jhailyn Ortiz has launched a team-leading 17 home runs this season to take home the R-Phils Big Stick award. Two of his homers were Grand Slams. He also had one multi-homer contest and he even recorded a long ball against Max Scherzer in a rehab stint. Ortiz recorded a career-high 101 hits with 25 doubles (7th in the Eastern League) and even one triple. The righty is currently batting .238, driving in 58 runs and scoring 67 (8th in the EL) of his own. He recorded a walk-off hit for the Fightins on May 13. He has also stolen a career-high nine bags. Ortiz has had 29 multi-hit contests to lead the team and 12 multi-RBI games, even one with five runs batted in. He’s played in 113 games for the R-Phils, the 5th most out of Phillies minor leaguers.

Ortiz was named Eastern League Player of the Week from May 10-15, 2022, Ortiz held a .417 batting average with 10 hits, two doubles and three homers. He has really showcased his power and his ability to drive the ball anywhere he wants. The 23-year-old was signed as an international free agent in 2016 out of the Dominican Republic.

Wendell Rijo is honored as the FirstEnergy R-Phils Most Valuable Player for the 2022 season. A deserving candidate, Rijo has led the team both on the field and in the clubhouse. Rijo boasts a .265 average in 89 games with the Fightins, despite missing just over a month with injury. He has 86 hits with 21 doubles and 12 homers in an impressive year. He’s recorded 51 RBIs and scored 54 runs of his own. Even after turning 27 this summer, Rijo is the fastest he’s ever been, crediting his offseason work. He stole 23 bases in total this summer for his career 100th bag.

A true team player, Rijo always carries a hard-working and positive attitude. He is constantly cheering his teammates on and offering insights that years of experience can provide. Even as a free agent signing, Rijo connected well with the team since Opening Day. He truly cares, not only about his performance but also that of his team.

He signed with the Phillies as a free agent in 2021 after playing in the New York Yankees, Boston Red Sox, Milwaukee Brewers, and Atlanta Braves organizations.