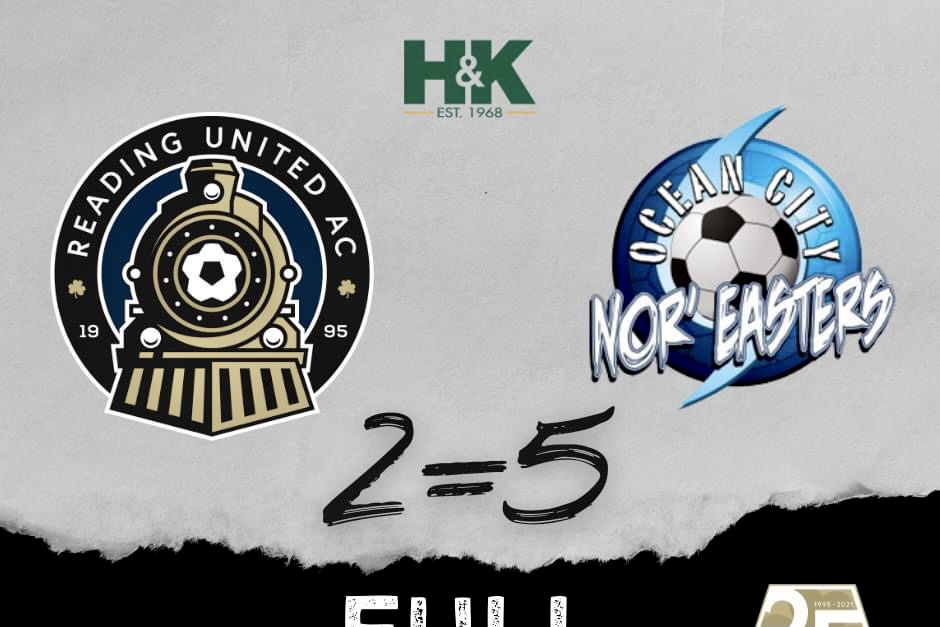 Longtime rivals Reading United A.C. and the Ocean City Nor’easters faced off at Berks Catholic High School on Tuesday evening in Mid-Atlantic Division action. Ocean City got the best of their hosts, defeating Reading, 5-2, to claim three important points in their playoff pursuit.

Reading United were the busier of the two sides defensively in the first half and managed to hold the Nor’easters at bay until the 26th minute. Off an Ocean City corner kick, Kasper Skraep headed the ball back across goal and gave Anthony Herbert an easy tap-in for the go-ahead goal to make it 1-0.

The visitors doubled their advantage in the 36th minute. Following a spell of possession in the attacking third, OC forward Kyle Galloway slipped in behind the United backline to rifle one into the roof of the net from close range at the near post.

Reading United went into the intermission down 0-2 and without a shot on goal as the Nor’easters dominated possession.

The hosts came out firing to begin the half and pulled a goal back just before the hour mark. Reading winger Zeke Zambrano recorded his second assist in as many games when he beat his defender and placed a cross that found the foot of Jacob Gosselin just outside the six yard box. Gosselin hammered home from close range in the 57th minute to make it 2-1.

Ocean City reclaimed their two goal advantage just five minutes later following a miscue from a Reading United throw-in deep inside the defensive third. Simon Becher picked up the loose ball and drove in toward the penalty spot from the left-hand side before slotting one into the side netting to make it 3-1.

Ocean City extended their lead to 4-1 in the 73rd minute courtesy of Austin DaSilva. Nor’easters midfielder Kyle Galloway took advantage of the space in front of the Reading center backs and drew the pressure before playing DaSilva through on the United defense. The Ocean City forward applied a cool finish at the far post to beat Burns.

Reading substitute T-Ben Donnie came off the bench and got on the scoresheet when he got on the end of Marcus Brenes’ free kick and slotted past Ocean City goalkeeper Owen Elliot to cut the Nor’easters lead to 4-2.

Ocean City substitute Matt Myers put the game out of reach in the 80th minute when he collected a ball from DaSilva and headed past the outreached hand of United goalkeeper Lucas Burns.

With the win, Ocean City clinched a place in the USL League Two postseason with two games to spare while Reading slumped to their seventh loss of a frustrating 2021 campaign.