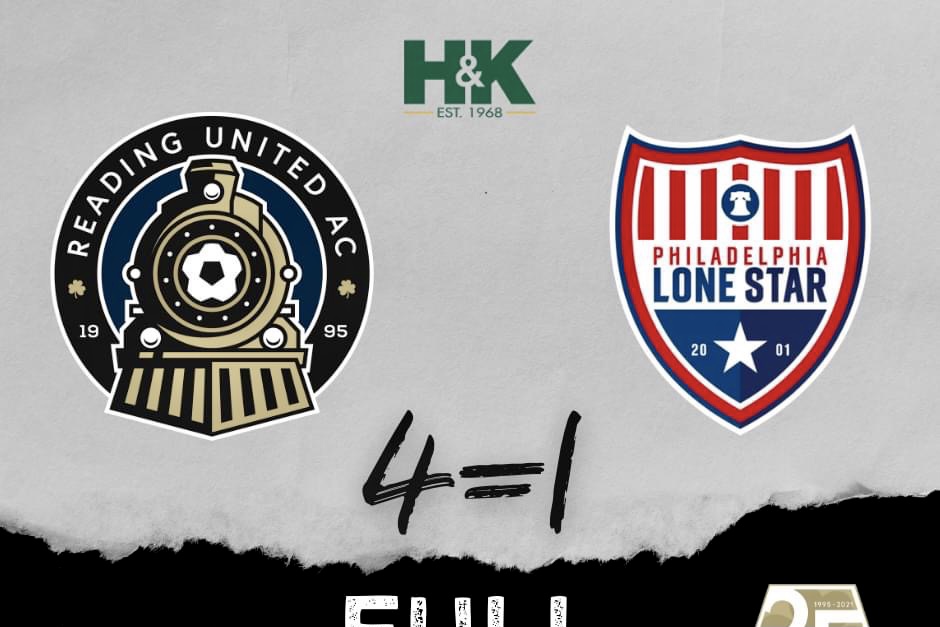 The win was Reading’s second of the season over Philly Lone Star. Andrea Disomma was the hero as his hat-trick powered Reading United offense’s to its largest goal output of the season.

Things didn’t start off well for the hosts as Philadelphia opened the score early with a goal scored by Anthony Allison in the 3rd minute of play. Lone Star midfielder Connor Manning ripped a shot on target that Reading goalkeeper Trevor Manion did well to block, but the rebound fell at Allison’s feet, who tapped the ball home to make it 1-0 to the visitors.

United shook off the early setback and came roaring back into the game. Reading pulled level in the 39th minute when wingback Raimondo Partito lofted a cross into the box that found Andrea DiSomma.

The United forward headed the cross back across the face of the goal and left Lone Star goalkeeper Goodwill Agbaadem hunting for the ball as it squirted across the goal line to make it 1-1 game.

After halftime, Reading United took control of the game and put together their most clinical half of soccer in the 2021 campaign. The 64th minute saw United take the lead for good when Jacob Gosselin played a cross from the right channel to an on rushing DiSomma, who buried the ball in the net for his second goal of the evening.

Reading would go on to double their advantage in the 68th minute. Lone Star defender Abdul Kooistra fouled DiSomma in the box and the referee immediately pointed to the penalty spot.

The in-form DiSomma secured his hat trick when he stepped up to the spot and coolly slotted his shot past Agbaadem. It was DiSomma’s team-leading fifth goal of the season. His previous goals also came in victories over Northern Virginia and the first meeting between Reading and Philadelphia.

Reading would add an insurance goal in the 79th minute. Substitute midfielder Pedro Botenne, who entered the game a minute earlier, danced through the Lone Star defense and scored on a clinical finish to push the score line to 4-1.

The win was Reading’s third of the season and pushed United three points closer to Lone Star in the Mid-Atlantic Division standings with 12.

Reading United will play their next match at Berks Catholic High School on Tuesday July 6th against their arch rivals, the Ocean City Nor’easters. The game will mark the return of former Reading Head Coach Alan McCann, who is now in charge of the Nor’easters. Kickoff for the game is scheduled for 7pm.