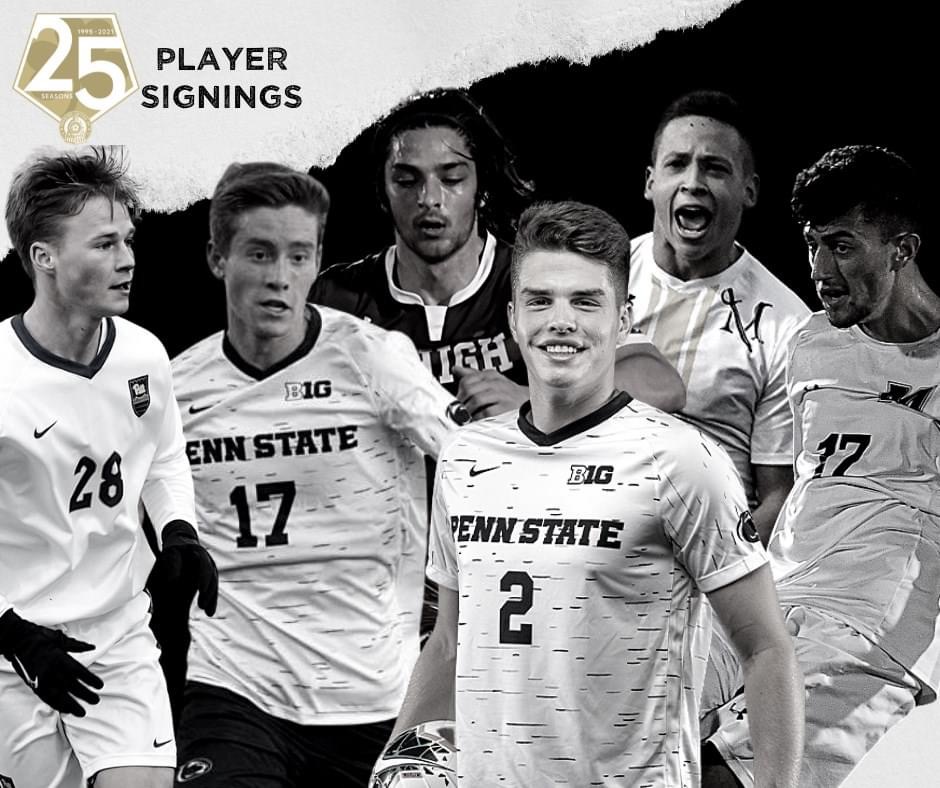 Reading United today announced the signing of six local players to their USL League Two team for the 2021 season, pending league and federation approval. Mason Deeds, Dom Flowers, Jake Gosselin, Alex Hajj, Seth Kuhn, and Nate Stricker all hail from Berks County and will make up a core of the local club this year.

Kuhn is the lone holdover from United’s 2019 season, while Flowers spent time with Reading United reserves the past two years.

Deeds is a 6-1 defender from Topton, who currently plays at Penn State University as a redshirt senior. Prior to his time with the Nittany Lions, he saw action in 18 matches for Georgetown. Deeds spent time in the New York Red Bulls Academy, seeing time in five games for New York Red Bulls II. He previously played in USL League Two with New York Red Bulls U23 in 2017, seeing 1322 minutes in 2017 and 2018 across 23 games.

Flowers is a 5-11 defender/midfielder from Wyomissing, who stars at Lehigh University. The former 2018 Berks County Player of the Year was a two-time All-Berks, All-PIAA, and All-Region selection while at Wyomissing. He also played for Lehigh Valley United’s club team, where he played an integral part in their U19 National Championship winning squad.

Gosselin is a graduate of Millersville University, where he finished top ten in program history in goals (29) and points (71). He was PSAC East Division Athlete of the Year after his senior season in 2019, where he was named to the D2CCA All-Atlantic Region First Team and United Soccer Coaches All-Atlantic Region First Team. Gosselin is currently an assistant coach at Alvernia University under head coach Casey Moore, who holds the same position with Reading United.

Hajj is a graduate of YSC Academy from Douglassville, Pa, who currently plays at Monmouth University as a redshirt junior. He’s played in 35 games over three seasons, starting 16 and tallying one goal. Before Monmouth, he starred at Continental FC, playing in 41 games and netting 13 goals.

Kuhn returns for his second stint with Reading, after seeing time in nine games during the 2019 season. He scored one goal and added one assist in 227 minutes with the club during their USL League Two runner-up season. His 2020 season with Penn State has also been productive, starting in all 13 of his appearances, scoring two goals with four assists. He transferred to Happy Valley after spending his freshman year at Duke, Kuhn is a graduate of YSC Academy and hails from Wyomissing.

Stricker is a graduate of Wilson High and resident of Sinking Spring. He has yet to touch the field as a midfielder for the Pitt Panthers, but has showcased his ability frequently during his time at PA Classics. Sticker also touts an invite to U.S. Boys National Team Futures camp back in 2017 alongside players like Philadelphia Union’s Paxten Aaronson.

Reading United kicks off their season this Saturday evening with a road trip up 222 to face Lehigh Valley United. The team will then face West Chester United on Wednesday before returning for their home opener against NOVA FC on Friday, May 21st.