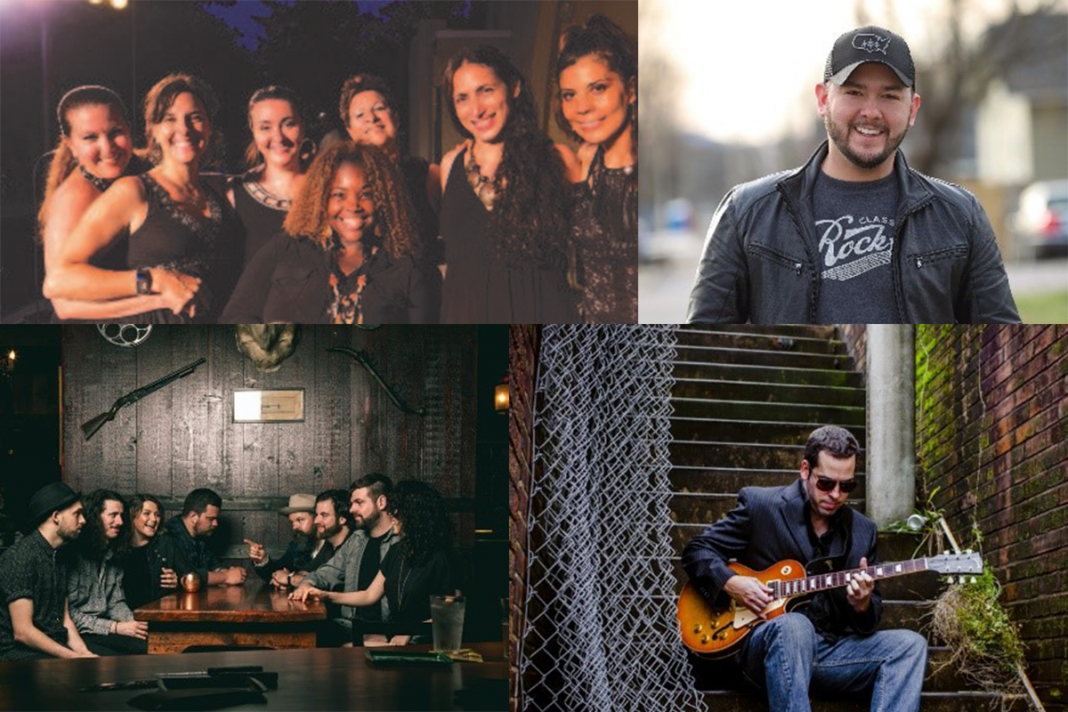 Berks Arts Council has announced the lineup for the 30th Annual Bandshell Concert Series scheduled for Friday evenings September 11, 18, 25 and October 2. Typically held in July, the Concert Series is being moved to the Fall this year in respect of the COVID-19 closures and large group gatherings. All concerts will begin at 6pm.

Concerts are held at the Volunteer Firemen’s Memorial Bandshell in Reading’s City Park. Concerts are held rain or shine. The 2020 series brings a diverse lineup of national artists to Reading to present a variety of musical styles from soul, blues, country to world Latin music to enjoy.

“Berks Arts is excited to continue a 30-year tradition of providing outdoor concerts to our local community as part of our mission to provide opportunities to inspire, engage and unite our community through the arts” said Meggan Kerber, Executive Director. “By moving the Concert Series to September this year, our goal is to bring the community back together to enjoy music outdoors in a safe environment.”

All Bandshell Concert Series performances are free and open to the public. Each concert will begin at 6pm. Attendees are encouraged to arrive early to secure their favorite location to watch the concert and enjoy local food vendors.

All social distancing and health and safety requirements will be in effect for artists, volunteers, vendors and attendees. Face masks are strongly encouraged to be worn under the guidance of the PA Department of Health. Family groups may sit together. Attendees will be asked to create a 6-foot distance between groups in City Park.

The Bandshell Concert Series opens on September 11 with Cocomama as part of the Celebration of Women in the Arts. A virtual United Nations of women, the members of Cocomama hail from five countries on four continents. Playing their own kind of World Latin music, powerfully virtuosic yet elegantly musical, Cocomama “brings it” creating a sound that is all at once fierce and beautiful!

Their debut album Quiero, which was included in the 2016 Grammy pre-nominations for Best Tropical Latin album, celebrates the coming together of a wide range of musical experiences in three different languages. As evidenced by their diverse repertoire, the group’s influences are limitless: Afro-Cuban, Classical, Jazz, Afro-Caribbean, Latin American, Soul, R&B and beyond. www.cocomamamusic.com

On September 18, The Commonheart, the Pittsburgh-based collective is offering feel-good positivity, Golden Rule messaging, and sweat-soaked performances that nimbly ease through blues, vintage soul, and rock. The nine-member ensemble is bonded by familial-like ties and a desire to foster spiritual uplift through the bands powerful vocals and strong rhythm and horn sections.

On September 25, Timmy Brown, is a singer, songwriter and recording artist. His infectious energy, talent and enthusiasm have made him a local favorite throughout the New England area. In 2018, Timmy Brown was voted New England’s Country Music’s Local Male Artist of the Year. In the fall of 2017, he auditioned for Season One of the “American Idol” reboot on ABC and finished in the top sixty contestants.

In 2019, Timmy sang the National Anthem at New England Patriots, Foxboro Stadium. Listen to his new music at timmybrownmusic.com

The 30th Anniversary Concert Series will wrap up on October 2 with Albert Castiglia. A favorite during the Reading Blues Fest, Albert is hails from Miami where he served an apprenticeship while backing legendary blues musician Junior Wells. He later went on to work with singer Sandra Hall.

Never content to allow himself to be conﬁned to any particular category, he embarked on a solo career that’s yielded nine critically acclaimed albums and consist kudos for his exceptional instrumental prowess, his searing vocals, and live performances that have dazzled audiences from coast to coast.

It’s little wonder that Miami’s New Times lauded him as South Florida’s “Best Blues Guitarist” or that USA Today was inspired to remark “It’s a revelation to discover the thrilling retro-electric blues from this astonishing young guitarist.

After the highly successful and critically acclaimed release of Masterpiece on Gulf Coast Records, Castiglia was nominated for two Blues Music Awards in the categories of Blues Rock Album of the Year and Blues Rock Artist. The new album by the Albert Castiglia Band, Wild and Free, was recorded live at The Funky Biscuit in Boca Raton, Florida.

This in your face live performance captures the energy and guitar mastery that Castiglia shares with his audiences each time he takes the stage. Wild and Free has everything blues fans are looking for… great songs …guitar virtuosity… and the raw power and emotion behind Castiglia’s live performance. http://albertcastiglia.net/

Organizers say that if Berks County is not under a full open status that allows group gatherings of more than 250, the 30th Anniversary Concert Series will be held in July 2021.