Thirteen Members of “The Sevens” Gang Charged in Superseding Indictment 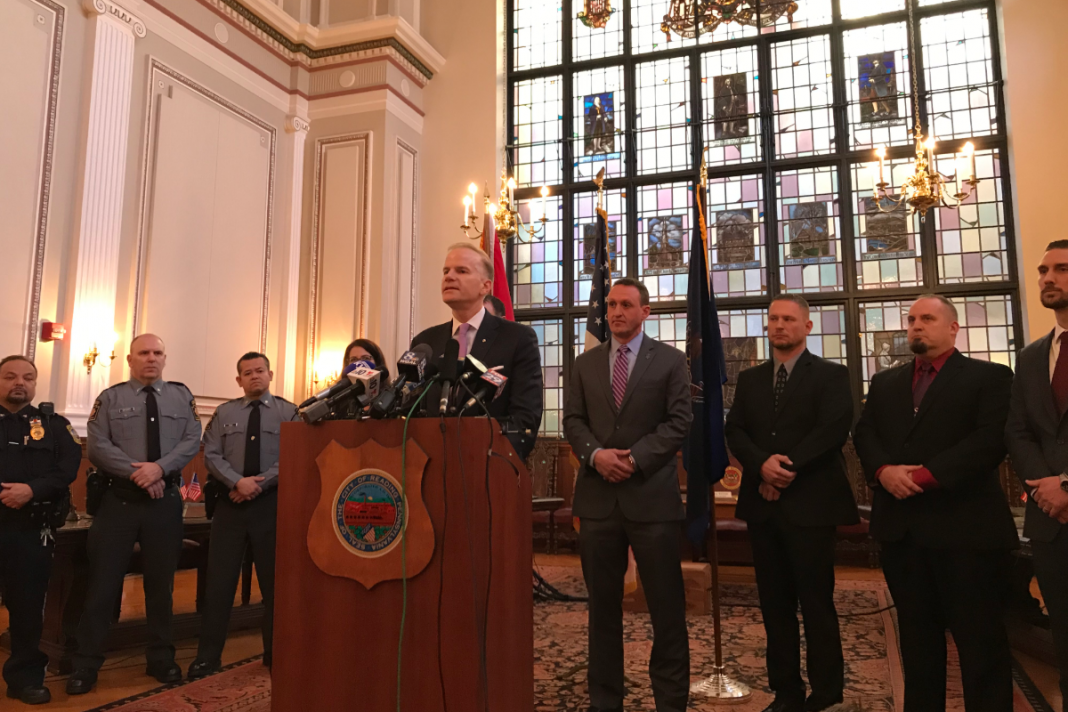 United States Attorney William M. McSwain and Acting Special Agent in Charge of Homeland Security Investigations (HSI) Philadelphia William Walker announced that 13 individuals from Reading were charged in a 22-count Superseding Indictment with offenses including conspiracy to participate in a racketeering enterprise; conspiracy to commit sex trafficking by force, fraud, and coercion of a minor; various violent crimes in aid of racketeering offenses including murder, attempted murder, kidnapping, and assaults with dangerous weapons; sex trafficking; and child exploitation and firearms offenses.

The charged individuals are:

The charges stem from a years’ long investigation by Homeland Security Investigations and the Reading Police Department for crimes committed by a gang called “The Sevens,” operating primarily from a boarding house located on 125-127 South 4th Street in Reading.

The racketeering conspiracy allegedly operated out of the boarding house as far back as December 2017, and it continued until in or about March 2019. Multiple acts of violence in furtherance of the conspiracy were perpetrated against many victims over this period of time. More specifically, the Superseding Indictment discusses 15 victims of sex trafficking and violent crime, two of whom are minors. The Superseding Indictment also sets out 43 overt acts in furtherance of this sex trafficking and drug trafficking conspiracy.

The charges describe a shocking series of dehumanizing and violent actions. For example, the Superseding Indictment recounts how one victim was held down while her hair was cut with gardening shears and was told she would be taken for a “trunk ride” if she did not comply with the gang’s demands. It describes how other victims were shot, assaulted with a baton, stabbed with a knife, and hit with a hammer.

Another was murdered. It details how another victim, a minor, was forced to have a sexual encounter with a gun held to her head; how that same victim was assaulted with a baton and hammer and locked naked in a dog kennel. It also describes how pictures of that victim’s abuse were used to advertise online the Sevens’ sex trafficking business.

“The allegations here against the Sevens gang describe a level of depravity that is hard to imagine,” said U.S. Attorney McSwain. “We have stopped this violence and the Sevens gang will no longer menace the streets of Reading. This is fitting in that January 2020 is National Slavery and Human Trafficking Prevention Month. My Office is committed to working with all of our federal, state, and local law enforcement partners to rid our District of the scourge of human trafficking.”

“The Sevens gang not only operated a sex trafficking ring involving minors, but also allegedly perpetrated crimes of drug trafficking, assaults, robberies, and even homicides,” said Acting Special Agent in Charge Walker. “These horrific crimes were taking place in our own backyard. Thanks to HSI’s close partnership with the Reading Police Department and our law enforcement colleagues in the area, we were able to track down these violent criminals, and most importantly, put a stop to an illicit operation that would have undoubtedly resulted in more innocent victims.”

“It’s critical that members of the public educate themselves on human trafficking crimes so they recognize the indicators and alert law enforcement accordingly. An educated public can help law enforcement rescue victims of these heinous situations and ensure those committing these acts are punished.”

“I would like to thank the U.S. Attorney’s Office for the Eastern District of Pennsylvania and Homeland Security Investigations for their cooperation and support during this lengthy investigation,” said Captain Paul Reilly, Investigations Division, Reading Police Department.

“The City of Reading is safer after the removal of the Sevens’ gang members from our streets. These individuals preyed on the young, weak and vulnerable members of our community. They held no reservations in resorting to violence to handle disputes or to enforce their authority in the community.”

If convicted, all defendants face up to lifetime imprisonment. The case was investigated by Homeland Security Investigations and the Reading Police Department, and is being prosecuted by Assistant United States Attorney Sherri A. Stephan.