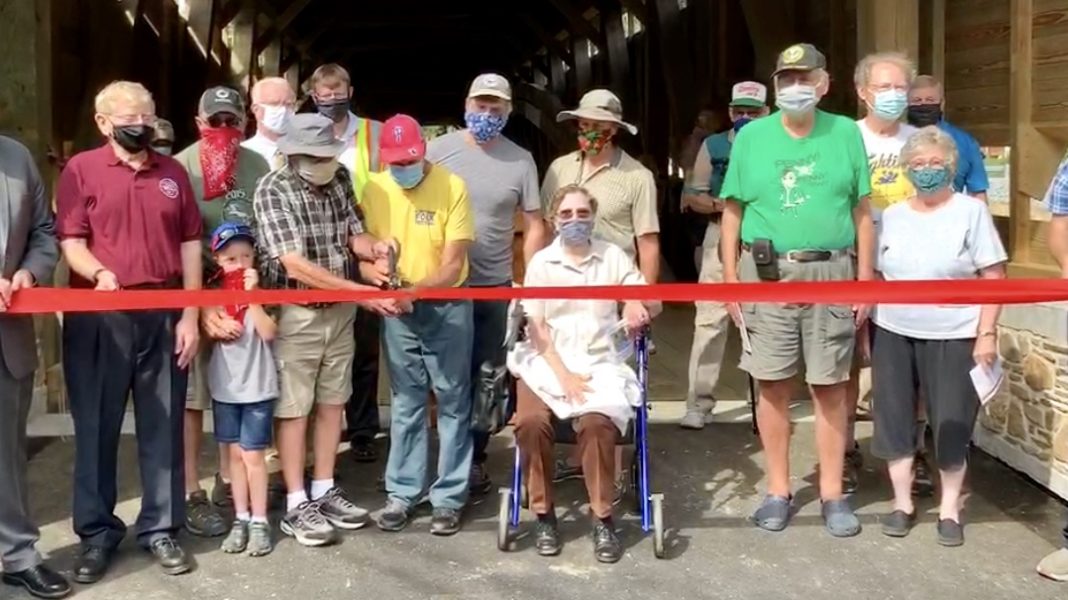 Commissioner Kevin S. Barnhardt and Commissioner Christian Y. Leinbach were joined by state and federal officials, contractors that helped complete the renovation, members of the Theodore Burr Covered Bridge Society of PA and even some members of the Dreibelbis family.

After remarks from the commissioners, historian Fred J. Moll, State Senator David G. Argall and State Rep. Jerry Knowles, Barnhardt invited anyone at the ceremony related to the family or with close ties to the bridge to join the officials for the cutting of the ceremonial ribbon. He and Leinbach then cut the ribbon into smaller pieces to hand out to the crowd as small mementos of the occasion.

The 168-foot single span located at 1 Covered Bridge Road was originally built in 1869 and cost about $5.48 million total to renovate. The project was funded through a $1.44 million 2012 National Historic Covered Bridge Preservation Program Grant, $2.72 million from the Federal Surface Transportation Program and $1.32 million from the County of Berks.

“This bridge has seen a lot of history,” Barnhardt said. “We’ve been able to preserve significant portions of the original bridge while retaining its historic eligibility, its contribution to our region’s heritage and tourism and assuring its availability for safe, modern use. Based on the work done here, this structure has the potential to be around for a long, long time.”

The bridge was built at the request of Manassas Dreibelbis to serve as a safe alternative to using a ford several hundred feet downstream from his mill in Greenwich Township. The initial construction of the bridge cost $6,000.

The county decided to invest in rehabilitating the bridge in 2010 and applied for the National Historic Covered Bridge Preservation Program grant.

Commissioner Barnhardt noted that getting the project started took some time and was then further complicated by a hurricane and the COVID-19 pandemic, but said the construction went relatively smoothly. He thanked the many hands that helped make the project a success, including rehabilitation designer P. Joseph Lehman, Inc. in Hollidaysburg, prime contractor Lobar Site Development Corp. in Dillsburg and major sub-contractors Lancaster County Timber Frames, Inc. in York and Greiner Industries Inc. in Mount Joy.

The rehabilitation strengthened the bridge for continued use while maintaining the bridge’s unique design and geometry and restoring it to its original look with red painted sides, clapboard siding, timber Burr arch trusses and timber deck. The bridge also sports fresh Pennsylvania Dutch hex signs at each portal for good luck, designed and painted by Eric Claypoole, to replace the originally signs painted by his father, Johnny Claypoole.

Commissioner Leinbach said he doesn’t consider the rehabilitation a transportation project, but an effort to preserve a piece of Berks County’s history. “The Dreibelbis Station Bridge is part of our heritage and we’re here today, in the midst of COVID-19, to celebrate the preservation of a monument that reminds us about who we are and where we came from,” Commissioner Leinbach said.