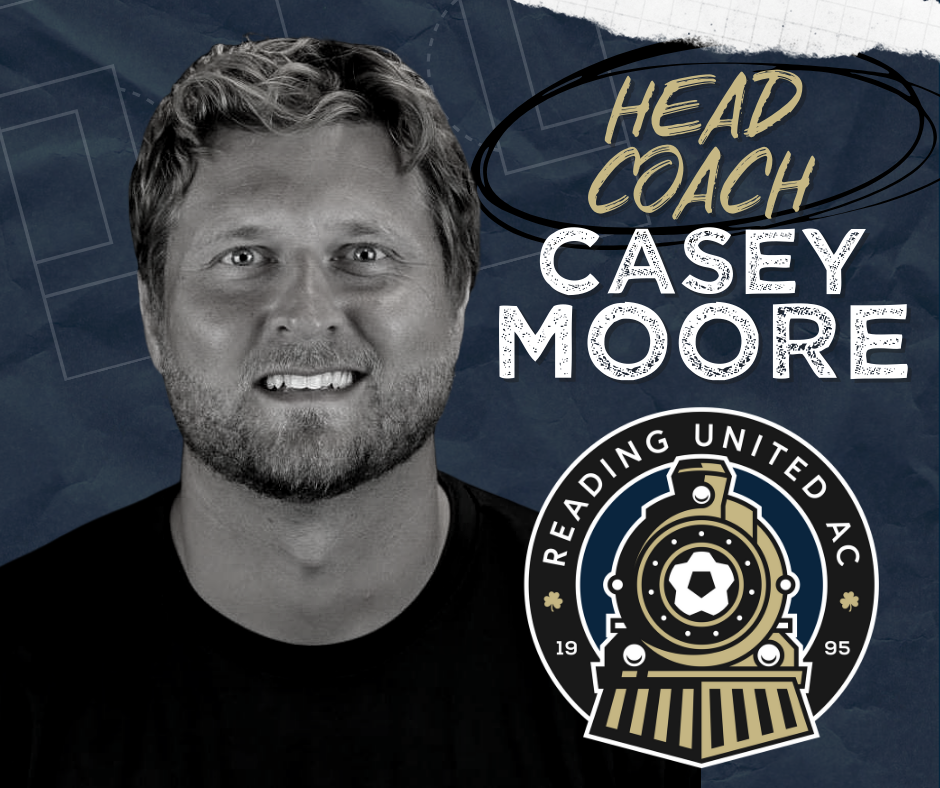 Reading United has named Casey Moore as the tenth head coach in franchise history, and the sixth since becoming an amateur side in 2005.

“Casey’s experience of working with and coaching young men was exactly what we were looking for,” stated Troy Snyder, Reading United President. “I am excited for our club, players, and what the future holds for Reading United.”

Moore joins Reading United in addition to his role as Men’s Soccer Coach and Director of Soccer Operations at Alvernia University, an NCAA Division III college located in Reading. He has been part of the Golden Wolves’ coaching staff since 2004, and has been at the helm of the men’s program since 2008. Moore is the all-time wins leader at Alvernia, putting together a 108-109-28 record in his 12 seasons as head coach. The Golden Wolves have won two Eastern Conference Athletic Conference (ECAC) crowns under his tutelage, the only postseason titles in program history. Alvernia has also made the MAC Commonwealth Conference playoffs in seven of the past nine seasons, while finishing .500 or better in conference play in eight of the last nine years, respectively.

“I would like to thank Troy Snyder and Art Auchenbach for this opportunity,” expressed Moore. “As a local, I have been a long-time supporter of Reading United, and now I am truly grateful and excited to be a part of this top class organization. Reading United has set the precedent as an amateur club that consistently provides players with a proven pathway into the professional game. The environment within the club promotes high-level training, continual player development, and maximizing the professional opportunities for the players. I am eager to get started and dig into the recruitment process to get the right players at the club. We will work tirelessly to attract the best players within the region while also hoping to secure the best local players. I have always felt that there is a lot of talent within the local area and I’m excited to offer these players a genuine opportunity with us. We will continue to provide the best experience and environment for players to develop and compete. We will continue to grow our brand and enhance the culture of excellence within the club.”

The Wilson High School and Elizabethtown College graduate will add a decidedly local flavor to United’s coaching staff. He was inducted into the Wilson Bulldogs Athletics Hall of Fame in 2017, highlighting his achievements in both soccer and swimming. Moore was a two-time All-Berks selection at midfield, while also a four-time District 3 champion and three-time All-American for the Bulldogs swim team.

He continued that success at Elizabethtown, where he was recently inducted into the Elizabethtown Ira R. Herr Athletic Hall of Fame. As a Blue Jay, Moore was an All-Commonwealth and NSCAA Mid-Atlantic Regional All-American midfielder. Moore also continued his success in the water as an All-American swimmer, finishing 10th in the nation in the 200 Freestyle. He was twice named Most Outstanding Swimmer in the MAC Conference, and was recently named to the MAC 100 All-Century Team for his swimming accolades.

Reading Vice President Art Auchenbach outlined, “We are thrilled to have Casey Moore bring his collegiate playing and coaching experience to Reading United. Casey and his Alvernia University staff have been very successful in identifying and recruiting local soccer talent. With all of the uncertainties created by COVID-19, one thing is very certain, Casey Moore will be well suited to guide our team for the foreseeable future. We look forward to seeing how he integrates the top local and regional talent into the brand of exciting, successful, football Reading United is known for.”

Moore inherits a Reading team that reached new heights in the previous two seasons, reaching the USL League Two final in both 2018 and 2019. He’ll look to continue the legacy of a club that has proven to be a professional soccer player factory, aiding in the development of 145+ professional alumni, including 82 active players. This past MLS SuperDraft saw another four players selected into the top tier of U.S. Soccer, continuing a stretch of eleven consecutive years where at least four former players have been drafted.

“Casey is an invaluable member of our coaching staff and has done an excellent job positioning our men’s soccer program in the MAC and regionally,” said Bill Stiles, Alvernia University Director of Athletics. “He has proven to be a great ambassador for Alvernia in the greater Reading area and throughout Berks County, so I think this role with Reading United is a great fit.”

Moore’s ability to attract top local talent to the Alvernia program made him a highly sought-after candidate for Reading’s recently vacated head coaching position. Multiple PIAA All-State selections from Berks County have decided to stay close to home and play for the Golden Wolves, with local players comprising roughly one-third of the team. His focus on creating a team environment that promotes brotherhood and team-building will help bring together a USL League Two team quickly, in a fast paced season that crams 14 games into two months over the summer.

Reading kicks off its 25th season in May, after losing the entirety of the 2020 campaign due to COVID-19. Three more open tryouts for the 2021 squad will be held in the coming months, with the next tryout held on Sunday, February 21st from 1-3pm at Don Thomas Stadium at Exeter Township Senior High School. Players can register at readingunitedac.com/tryouts.