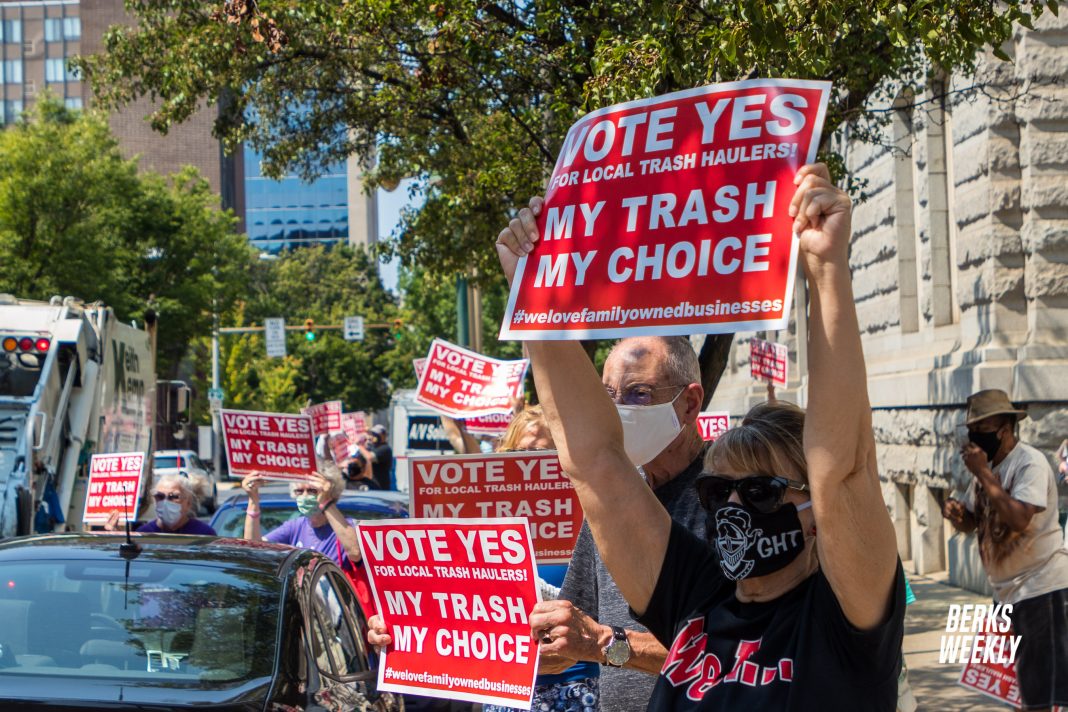 The protest began with a parade of trash trucks in front of city hall. Organizer John Zatratz says he planned the protest to support local independent family trash businesses.

In July, city council voted to approve an ordinance in favor of municipal trash services. All properties with six units or fewer would required to participate.

To gain support for his movement, Zatratz has been using the hashtag #welovefamilyownedbusinesses, and has been circulating a petition requesting the decision be put on the ballot for a vote by Reading citizens.

Reading Mayor Eddie Moran released the following statement in response to the protest.

“I am aware a few individuals are protesting at City Hall. I want to let them know that I hear you, and I see you. As the Mayor, I acknowledge some decisions are more difficult than others, but I make them for the betterment of the whole City.”

“Several opportunities were given and made available to ensure every side on the solid waste collection debate was heard. The City presented supporting facts for its Clean City Initiative such as the recommendations from the Keep Pennsylvania Beautiful report of 2020, The Cost of Litter and Illegal Dumping in Pennsylvania. In the report it was noted that “the City of Reading spends over $2 million annually on litter and illegal dumping – 89% of that amount is spent in cleaning after the fact.”

“Another relevant fact is that as of this moment, only 5 of 17 private haulers comply with the City reporting requirements for properties they add or remove from their service.”

“A cleaner City is possible. A single trash hauler municipal collection system a well-documented best practice that has improved the quality of life in many communities near and far. I will continue researching, consulting, and looking for more ways to improve the public health and appearance of our City. I’m not against any specific group; I’m on the City’s side, and I assure you, Reading will become a place where we can all proudly live, learn, work, and play. We will build a better Reading together!”