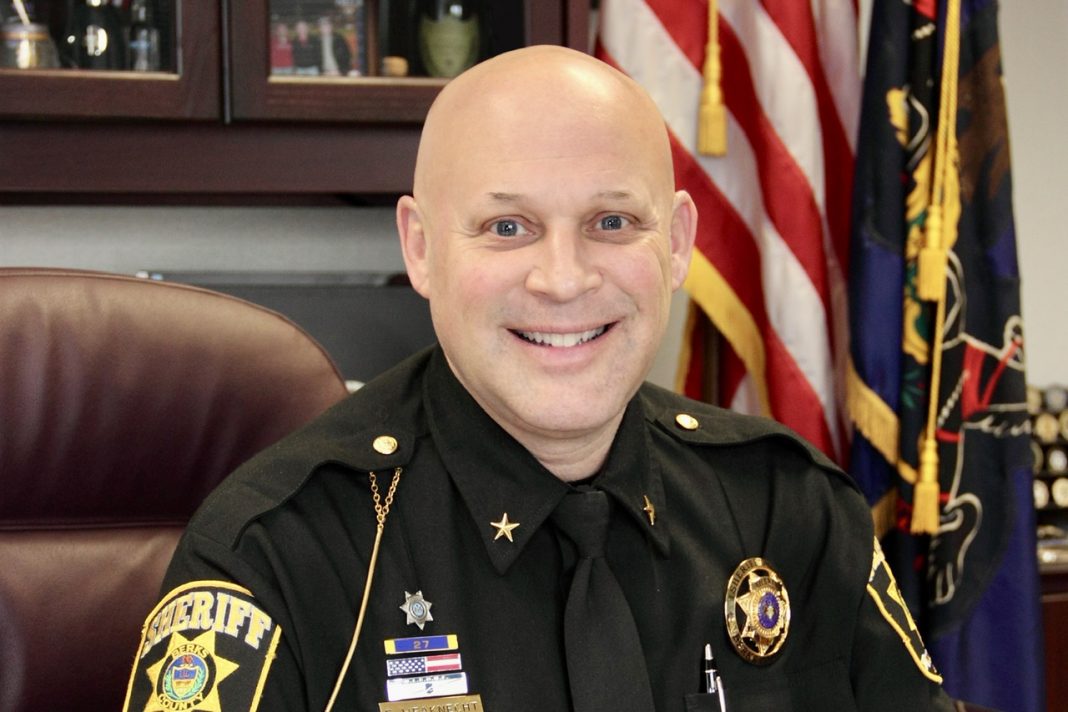 Berks County Sheriff Eric J. Weaknecht has announced his re-election bid. “I am proud to serve the citizens of Berks County as their elected sheriff,” said Sheriff Weaknecht.

“As your sheriff for the last 15 years I have led by example serving the citizens of Berks County by professionalizing the Sheriff’s Office staffing and modernizing law enforcement services. By partnering with federal, state, and local law enforcement agencies we’ve been successful at combating violent crime and being true to my vow to Keep Berks Safe,” said Sheriff Weaknecht.

“As an elected official, I am committed to making county services more accessible for the citizens of Berks County. In 2011 I spearheaded the initiative to open a Substation at the Reading Regional Airport to do just that,” Weaknecht added.

Some of Eric’s accomplishments are:

Sheriff Weaknecht updated the hiring standards of the office to create opportunities for a greater number of applicants and to ensure that the most qualified candidates are hired. These new standards include Physical Agility Test, Written Test, Background Investigation, Oral Interview, Voice Stress Test, Psychological Test, and Drug Testing.

This program helps to serve Berks County citizens with cognitive disorders such as Alzheimer’s disease and Autism who may have wandered away from home. Nationwide Project Lifesaver has safely recovered over 2,200 clients with an average recovery time of 30 minutes.

Sheriff Weaknecht established an Explorer Poster for young adults interested in a law enforcement career. Named after fallen Berks County Deputy Sheriff Kyle Pagerly, members meet once a month with deputies of the office who provide information and hands-on training in many areas of law enforcement.

In June 2012, Eric was appointed by Governor Tom Corbett to the Sheriff’s’ and Deputy Sheriffs’ Education and Training Board. The Board advises the Pennsylvania Commission on Crime and Delinquency in the development, implementation, and operation of legislatively mandated basic training and continuing education that serve as the basis for certification of deputy sheriffs within the Commonwealth’s 67 counties. He has been reappointed by Governor Wolf for an additional two terms. For the last two years Sheriff Weaknecht was elected by the board member as chairman of the board.

“Law enforcement training is a key element to a successful law enforcement career. As chairman of the Sheriff’s and Deputy Sheriffs’ Education and Training Board I can ensure that the training deputy sheriffs in Pennsylvania receive a second to none,” Weaknecht said.