The National Weather Service in Mount Holly, NJ has been busy the past few days surveying storm damage following the regional outbreak of tornadoes on Thursday. So far, nine tornadoes have been confirmed in Southeastern Pennsylvania and in New Jersey. The largest, an EF3 in the Bensalem/Trevose area.

Closer to home, a Tornado Warning was issued for Northern Berks County Thursday, which covered the Kempton, Lenhartsville, and Topton areas, and also extended into Lehigh County.

With severe storm damage reported in both Counties, the National Weather Service deployed a survey team Saturday morning to search for evidence of a tornado.

The path of the tornado was spotted near Turkey Road, with peak winds estimated at 90 mph, traveling 2.8 miles (originally reported 1.6 miles) on the ground.

In addition to downed trees and debris visible from the road. The team used a drone to survey the area, finding farm fields with a clear tornado path of destruction.

According to the NWS survey team, a tornado touched down near Turkey Road in Kempton, Albany Township, Berks County, just west of the border with Lehigh County. About 15 trees were uprooted in the area of Turkey Road with a convergent damage pattern noted in multiple nearby corn fields. The path continued to between Kunkels Mill Road and Red Road near the far southern tip of Lynn Township in Lehigh County.

“Mostly minor crop and tree damage was observed in this area, but with a continued clear convergent pattern. A resident on Red Road filmed the tornado as it passed to his south. The tornado passed through an open field before crossing Rhoads Road, where tree and minor roofing damage were sustained” reads the finalized survey report. 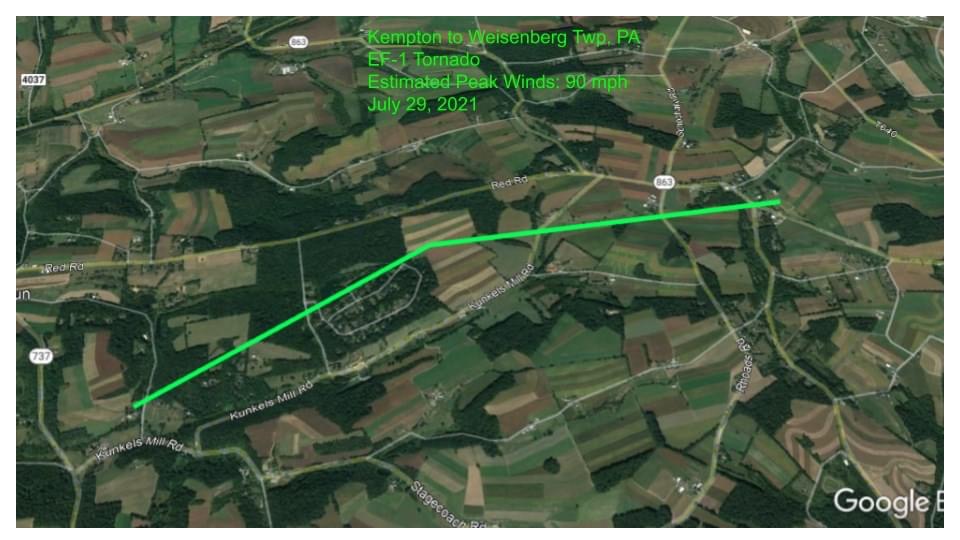 “East of Rhoads Road, a number of trees were snapped and uprooted as the tornado approached New Smithville Road. The tornado crossed Golden Key Road, uprooting a few more trees, before dissipating in a field prior to reaching Loch Valley Road in Weisenberg Township. The extent of tree damage both near the start of the path in Kempton and in the New Smithville Road area merited an EF1 rating.

The survey was completed by Southeastern PA Skywarn Coordinator, Lou Ruh, with help from Berks County resident and professional storm chaser, Justin Selig, and several members of the public, who were not named.