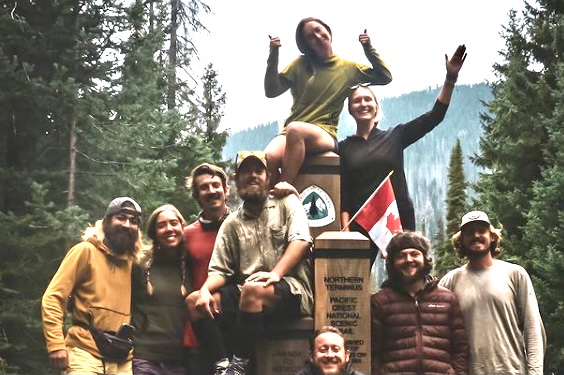 The PCT is a continuous path that runs from southern California at the Mexican border to the Canadian border, passing through diverse ecosystems and environments. On his northbound journey, Yackanicz hiked through the deserts of California to the forests of Oregon to the Cascade-Sierra Mountains in Washington, covering 2,650 miles in 163 days, from March 22 – September 1, 2021.

When asked what motivated him to complete the hike, Yackanicz, said it was a love of adventure that set him on the path less traveled – a love that was born at Penn State Berks, where one of his professors, Dr. Robert Zambanini, Jr., introduced him to hiking in 2013. An avid hiker himself, Zambanini also introduced him to ‘highpointing,’ or ascending to the highest elevation in a given area – often a mountain summit. So far, Yackanicz has reached the highpoint in 46 of the 50 states, with only Montana, Wyoming, Alaska and Hawaii remaining.

After graduation, he went on to work as a manager in a limestone quarry for three years, until adventure called and he decided to drive across the country in his 2004 Hyundai Elantra. That’s when he committed to another adventure: Hiking the Pacific Crest Trail.

A thru-hike of the PCT requires preparation, explains Yackanicz, so he began doing his research, reading blogs and watching videos on YouTube. He learned that hiking permits on the northbound route are only awarded from March 1 to May 31 each year. With months on his hands before he could secure a permit, he decided to accept a temporary position while he planned his journey.

Timing is critical for thru-hikers, states Yackanicz who secured an early permit and acknowledges that he “got lucky.” He explains, “I beat the fires that are burning now in California: More than 100 miles of the PCT have burned just this year. There was a low snowpack in the Sierra Mountains. And I got through Washington before the weather turned and the snow came.”

With a backpack filled with only the essentials – a sleeping bag and pad, tent, stove and cook pot, food, iPhone, battery pack, trekking poles, trowel, toiletries, and a few items of clothing, he hit the trail.

Yackanicz explains that while this sounds like a lot of heavy equipment, he purchased special light-weight gear suited for long distance thru-hiking, so his backpack only weighed about 15 pounds before food and water, adding that while light-weight equipment is more expensive, he considered it an investment in protecting his body.

Food choices were determined by what traveled well, meaning it had to be nonperishable and lightweight. Meals also had to be high in carbohydrates, protein, and yes – fat, and ranged from dehydrated foods such as ramen noodles, instant mashed potatoes and macaroni and cheese, to tuna wraps, protein bars, cookies, candy and chips.

Even olive oil was an everyday staple on the menu for its high level of ‘good’ fats and calories. To stay hydrated, he carried a water filtration system with light-weight bottles, which he filled at streams, ponds, lakes and rivers along the way.

As it was nearly impossible to consume the nearly 5000+ calories burned every day by hiking, he lost 30 pounds during the five-month expedition.

But it wasn’t all dehydrated food and olive oil; Yackanicz comments that he also enjoyed some good meals in town during ‘zero’ and ‘nero’ days, terms used to describe the days where zero miles or nearly zero miles were walked, which he adds were an important part of the process. These days were used to go into town to give his legs some needed rest, take a shower, do laundry, eat a decent meal and get a good night’s sleep in a real bed before hitting the trail again.

When asked about the hardest part of the journey, Yackanicz responds that trekking through Northern California during the heat wave in late June and early July was particularly grueling, with temperatures consistently over 100 degrees Fahrenheit.

“The journey was very physical but it was also very mental,” states Yackanicz, who said that some days he would cover 25-30+ miles. “It was a reaffirmation of my mental toughness. I also rediscovered my love and desire to be around diverse groups of people.” He adds that he met people of all ages and cultures on the trail.

Yackanicz began the journey on his own, but he is quick to add that he made many friends along the way, finishing with a group of 12 hikers who he met within the first 200 miles. His new friends gave him the trail name ‘Lyric,’ a nod to his ‘weird habit of picking up on words and phrases and breaking into song.’

“Everyone on the trail had a trail name. I don’t even know the real names of some of the people I hiked with,” he explains.

As for his favorite part of the journey, that was hiking through Washington state, where he enjoyed daily breathtaking views of mountains in the North Cascades. He was so inspired by the beauty of Washington that he is considering moving there in the future.

And what does the future hold for Yackanicz?

Currently he is hiking the Adirondacks in upstate New York. After that, he is flying to Portugal to meet up with friends he made on the PCT, and he plans to travel through Europe for about three months, staying as long as he can on a temporary visa.

There’s no doubt that the next adventure is right around the corner.